Science at the Edge of the Solar System

The Interstellar Boundary Explorer is clearly a mission whose time has come. Scheduled for launch in 2008 and recently confirmed for mission implementation, IBEX will provide global maps of the distant interactions where the heliosphere (the ‘bubble’ of space carved out by the solar wind) meets the interstellar medium. All of this at a time when Voyager 1 is thought in some quarters to have already crossed the ‘termination shock,’ that region where the solar wind is slowed as it encounters interstellar gases; some evidence suggests that the spacecraft then moved back into the supersonic solar wind. 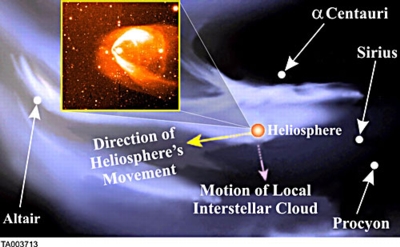 Image: The Sun’s movement through the local interstellar medium. IBEX should tell us much about the boundary separating the heliosphere from this region. Credit: Southwest Research Institute.

The Voyager findings remain controversial thanks to magnetic field and cosmic ray measurements that suggest different interpretations, but it’s clear that Voyager is at the very edge of the heliosphere. Which makes this a good time to mention the Jet Propulsion Laboratory’s podcast interview with Voyager scientist Ed Stone (California Institute of Technology), which includes information about the latest findings. In the interview, Stone discusses what happens as you approach the edge of the solar System:

Stone: The bubble is created by the supersonic wind, which means as the wind approaches contact with interstellar wind, it must abruptly slow down and turn around and head down the tail, because the heliosphere is shaped like a comet and so where it abruptly slows down is a standing shock wave, a supersonic shock wave just like in front of a supersonic aircraft. Voyager 1 has now crossed that shock for the first time and is in the region where the wind has slowed down and is turning around to head down the tail of the heliosphere.

Narrator: Okay, so the region it’s in now is called?

Stone: That region is called the heliosheath because it’s the region between the shock and the heliopause, which is the surface of the bubble. That is the edge of interstellar space. Beyond that the material we will be in will be material from other stars. Inside the heliosphere, all the material is coming from the sun and that’s where all the planets are, that’s where all the spacecraft have been, that’s where Voyager still is. But eventually Voyager will exit this bubble and be in interstellar space surrounded by material from other stars.

Firming up our understanding of what is happening to the Voyagers, the IBEX mission is designed to create global energetic neutral atom (ENA) images based on hydrogen ENAs generated in the inner heliosheath, thus telling us much about the properties of the solar wind flow in the regions now being crossed by the spacecraft. Another useful area of research: how the solar wind regulates galactic radiation, crucial data for future probes beyond the Solar System.

IBEX won’t itself travel to these regions. Its target is a highly elliptical orbit reaching 150,000 miles from Earth at apogee. A low-cost mission (first proposed by Southwest Research Institute and now part of NASA’s Explorer program), the spacecraft will be launched from Kwajalein on a Pegasus rocket dropped from an airplane. But it should pay off with big science dividends since the interaction between the Solar System and the interstellar medium has never been directly observed. “Everything we think we know about this region is from models, indirect observations and the recent single-point observations from Voyagers 1 and 2 that frankly have created as many questions as answers,” says principal investigator Dr. David J. McComas. Now comes the needed closer look.