Yet Another Puzzle from Enceladus

Enceladus continues to be an unlikely story, a tiny Saturnian moon jetting icy plumes of what seems to be water vapor from the surface of its south pole. Some believe there is even the potential for life here. But how did the ‘hot spot’ that produces this activity wind up precisely at the pole? We’ll know more through future Cassini measurements, but a new study suggests that such a low-density region could cause the moon to roll over, thus moving this material to the polar area while repositioning excess mass at the equator. What’s more, the bizarre Uranian moon Miranda may bear witness to the same phenomenon.

The theory seems to gibe with other aspects of Enceladus including the surface features Cassini has so vividly imaged. The famous ‘tiger stripe’ pattern gives evidence of being made up of fault lines caused by tectonic stress. And the temperature variation at the pole also reinforces the reorientation concept. “The whole area is hotter than the rest of the moon, and the stripes are hotter than the surrounding surface, suggesting that there is a concentration of warm material below the surface,” says Francis Nimmo (UC-Santa Cruz), a co-author of the paper published in the June 1 edition of Nature. 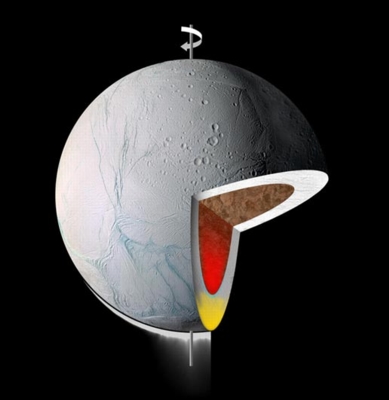 Image: This graphic illustrates the interior of Saturn’s moon Enceladus. It shows warm, low-density material rising to the surface from within, in its icy shell (yellow) and/or its rocky core (red). A NASA-funded study says Enceladus might have rolled or rotated itself to place this area of low density at the south pole. Credit: NASA/JPL/Space Science Institute.

To explain the existence of this internal heating, look to tidal forces exerted by Saturn, causing Enceladus to be squeezed and stretched, thus generating heat in the interior. The heated upwelling of material, known as a ‘diapir,’ then rises from the core or the icy shell around the moon toward the surface, leading ultimately to the reorientation scenario the paper discusses. Visual evidence may eventually be provided by Cassini, which can show whether the pattern of impact craters on the moon has itself become reoriented.

Previous post: Science at the Edge of the Solar System