Miniature Planetary Systems May Be Common

Centauri Dreams marvels at the growth of the new lexicon whose definitions routintely fill these pages. Just the other day we encountered ‘mascon’ — a concentration of mass denoting the presence of a long-obscured crater. Today we get ‘planemos’ — planetary mass objects that float freely through space rather than orbiting a star. The latter come from new findings being discussed at the American Astronomical Society’s Calgary meeting that started yesterday and runs through Thursday. We’ll have a good deal to say about that meeting as the week progresses.

But back to planemos, whose existence was suggested by earlier work on brown dwarfs, many of which are known to be surrounded by potentiallly planet-forming disks of material. “Now that we know of these planetary mass objects with their own little infant planetary systems, the definition of the word ‘planet’ has blurred even more,” says Ray Jayawardhana (University of Toronto), who presented the findings in Calgary today. “In a way, the new discoveries are not too surprising – after all, Jupiter must have been born with its own disc, out of which its bigger moons formed.” 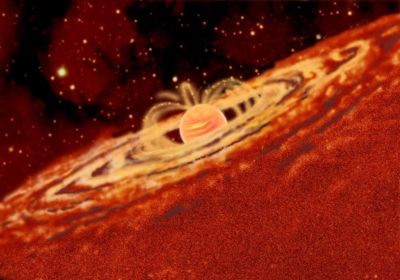 Image (click to enlarge): Astronomers have found disks of dust and gas, the raw material for planet making, around objects that are only a few times heftier than Jupiter. These findings suggest that miniature versions of the solar system may circle “planemos” that are some 100 times less massive than our Sun. Credit: Jon Lomberg (www.jonlomberg.com).

But Jupiter is a mini-solar system orbiting within a larger one. What Jayawardhana and team are looking at are six newly formed objects somewhat larger than Jupiter that are located in star-forming regions some 450 light years from Earth. Their infrared signatures, detected by European Southern Observatory telescopes, lead the astronomers to believe they will evolve planetary systems of their own. All are larger than Jupiter, but range between five and fifteen times Jupiter mass, so they’re clearly not brown dwarfs.

Backing up these conclusions is a second study by Jayawardhana, Subhanjoy Mohanty (Harvard-Smithsonian Center for Astrophysics) and colleagues that targets the brown dwarf 2M1207, known to have a planetary companion discovered some two years ago and dubbed, logically enough, 2M1207B. That planet, some eight times the mass of Jupiter, orbits the brown dwarf at about 40 AU. It has now been shown to be orbited by a disk of its own, an indication that objects not much larger than Jupiter may be prolific in producing small planets.

The size of this planet in relation to the brown dwarf it orbits, and its unusually large separation from the dwarf, tell us something about how 2M1207B probably formed. “Mass ratios of that size are more typical for binary stars than for planetary systems,” said Mohanty. “2M 1207B probably formed like a star, together with the brown dwarf, rather than from core accretion like giant planets around other stars.”

Centauri Dreams‘ take: These findings should strengthen our interest in brown dwarfs, around which planetary systems now seem more and more likely to be found, and suggest intriguing new candidates for potential biospheres as we tune up future life-finder space telescope missions. Indeed, the last five years have begun to shift attention from a narrow focus on Sol-type stars to potential life-bearing worlds around M-class red dwarfs, and it is clear that we may have to keep other options open in a universe that seems to produce planetary systems wherever and whenever it gets the slightest chance.