Going to the stars is a matter of hard science, but it’s also a question of inspiration. I know scientists who found their calling by reading Poul Anderson’s novel Tau Zero, and others whose love of the early Star Trek forever changed their career path. But for some of us, growing up in the 1950s, it was Tom Corbett, Space Cadet that did the trick, and for me, it was a book by Carey Rockwell called Danger in Deep Space (New York: Grosset & Dunlap, 1953). The second in the Tom Corbett series, the book exposed this space-crazy kid to a planet orbiting one of the Alpha Centauri stars, and before long the thought of habitable worlds around stars other than our own became an obsession.

Which brings us to Frankie Thomas, who died recently of respiratory failure at the age of 85. A workmanlike actor who appeared in a number of pre-WWII films and Broadway plays, Thomas took up radio and television work after leaving military service and was cast as Tom Corbett in 1950 (beating out a young Jack Lemmon for the role — I kid you not). The show became a hit, running on CBS, ABC, NBC and the DuMont network at one time or another, and spawning a wild assortment of products bearing the Corbett name. Kellogg’s even named a cereal after it: Kellogg’s Pep, the Solar Cereal. 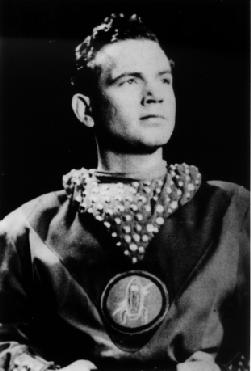 Tom Corbett, Space Cadet seemed to draw on Robert Heinlein’s 1948 novel Space Cadet, but the series quickly diverged in the hands of science fiction writer Joseph Greene. It would run from 1950 to 1955, spawning a radio show, comic books and a newspaper strip and the eight hardback books many of us remember most clearly from the Corbett phenomenon. In a future where the Solar Guard safeguards a colonized Solar System and conducts advanced scientific research, the show followed Corbett and fellow cadets Astro and Roger Manning as they worked their way through the rigors of the Space Academy. Their spaceship was the Polaris, a 200-foot atomic powered marvel.

Image: Actor Frankie Thomas, who died in May, became the embodiment of science fiction in the early television era.

Hey, you just couldn’t beat this stuff in its day. Here’s the Polaris being taken out for a run in Danger in Deep Space:

The giant ship began to shudder as the mighty pumps on the power deck started their slow, whining build-up. Tom sat in front of the control panel, strapped himself into the acceleration chair, and began checking the dials and gauges. Satisfied everything was in order, he fastened his eyes to the sweeping red second hand on the solar clock. The teleceiver screen brought a sharp picture of the surrounding base of the spaceship, and he saw that it was all clear. The second hand reached the ten-second mark.

“Stand by to raise ship!” bawled Tom into the intercom. The red hand moved steadily, surely, to the zero and the top of the clock face. Tom reached for the master switch.

I particularly love that sweeping red second hand, just as I love the slide rules Hal Clement’s crew uses in the SF classic Mission of Gravity.

Thomas would go on to become a TV and radio writer as well as a novelist, but the Corbett role seems to have been the one that most pleased him. At his request, he was buried in the costume he wore for the show. Hearing of his passing, I was reminded by a reader of two other deaths that should have been noted here. Ed Kemmer, who played Buzz Corry on the radio and TV show Space Patrol, died in 2004, while George D. Wallace, who played Commando Cody in the Republic serial Radar Men from the Moon and also appeared in the 1956 gem Forbidden Planet, among many other credits, died last July.

Great art they were not, these early television and movie serials, but my memory of both Tom Corbett, Space Cadet and Space Patrol is still bright, and it’s an agreeable thought that such popularizations led to scientific careers for some young viewers. An ongoing interest here is the development of the first science fiction magazines and their treatment of science in non-fiction articles as the genre matured. One suspects that the shelves of some scientists may still sport, like mine, at least a few issues of the old pulp magazines. But if not, I’ll bet many still have memories that refuse to fade of the early television era, when the idea of getting into space could energize an entire nation and a mission to the stars seemed just around the corner.