Interstellar Migration and the Human Experience

Centauri Dreams returns to its normal schedule on Monday, following a week devoted to the emergence of the Tau Zero Foundation. Next week will be a busy one, with a new and significant study of Proxima Centauri, a more detailed than ever look at the complicated happenings around Beta Pictoris, and a paper presenting a fast, beamed propulsion mission to Alpha Centauri serving as the highlights.

Thanks to all who wrote asking for further information about the Tau Zero Foundation and its plans to support research practitioners in work that may one day lead to interstellar flight. I’ll continue to follow Foundation news here as the group works towards the launch of its own Web site. It’s heartening to see the spirit of exploration embraced by readers and advocated on the Net, as noted, for example, in this post on Brian Wang’s Advanced Nanotechnology site. A snippet:

If we had the will we would mount a D-Day scale invasion of space. The current space effort, as noble as it has been, was to send a handful of people out with car batteries and camping generators. This is not enough. We need to send out thousands with gigawatt powerplants and equipment to build industries. It should be about a historically large and grand vision, that will invigorate America and civilized nations. It will give a powerful reason for children to engage in math and science. 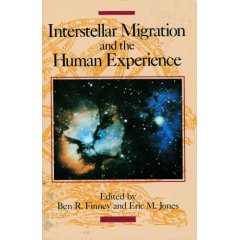 As we contemplate moving forward in interstellar research, it’s important to emphasize where exploration fits into the broad pattern of human history. A book that anyone serious about interstellar issues should have on the shelves is Interstellar Migration and the Human Experience, edited by Ben R. Finney and Eric M. Jones (Berkeley: University of California Press, 1985). This volume is made up of the proceedings of the Conference on Interstellar Migration held at Los Alamos in May of 1983, an event attended by practitioners in a wide spectrum of sciences, from astrophysics to anthropology. Its insights into societal migration, emerging technologies and our evolving human future frame a debate that will engage us throughout this century and beyond.

Here, from an essay by Ben Finney titled “Voyagers into Ocean Space,” a comparison of our push into space with the experience of ancient generations:

The whole history of Hominidae has been one of expansion from an East African homeland over the globe and of developing technological means to spread into habitats for which we are not biologically adapted. Various peoples in successive epochs have taken the lead in this expansion, among them the Polynesians and their ancestors. During successive bursts lasting a few hundred years, punctuated by long pauses of a thousand or more years, these seafarers seem to have become intoxicated with the discovery of new lands, with using a voyaging technology they alone possessed to sail where no one had ever been before.

Once their attempts to cope with the rising sea levels of the Holocene committed them to sea, the first pioneers of this lineage of seafarers had good reasons to keep going. The continental mind set of their distant ancestors would have faded as successive generations pushed father and farther east, to be eventually replaced by the more accurate view that the world was covered with water through which bits of land were scattered. They therefore knew that in pushing into the open ocean they were entering not a vast empty region but one teeming with islands. What is more, after leaving the Bismarck Archipelago and outdistancing their less sea-adapted rivals, they would have realized that before them lay an ocean of islands accessible to themselves alone. What more invitation did they need?

These Stone Age voyagers may be our closest analogue to future interstellar travelers. Finney believes that the early pioneers who push into the Solar System will have so thoroughly adapted to the space environment that they — and not those who have remained behind on Earth — will be the ones likely to move on out into the Kuiper Belt, the Oort Cloud, and eventually to nearby stars. It’s an incisive and insightful comparison. Like the ancient Polynesians, we stand on the shore of a limitless ocean, and the belief here is that interstellar travel is hard-wired into our genes, no more stoppable than the tide.