Xanadu, that bright continent-sized aberration on the surface of Titan, begins to look somewhat familiar in new radar images from the Cassini orbiter. It’s surrounded by darker terrain, cut by rivers and filled with hills and valleys. Cassini could identify a crater, probably created by asteroid impact, and flatter areas into which the rivers flow — these are presumably lakes. Geologically and topographically (and ignoring for a moment the deep freeze), the place does look something like Earth, even if rain there falls in the form of methane. 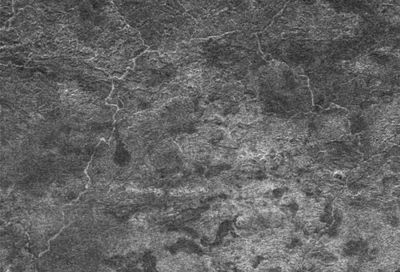 Image: A network of river channels is located atop Xanadu, the continent-sized region on Saturn’s moon Titan. This radar image was captured by the Cassini Radar Mapper on April 30, 2006. These winding, meandering river channels start from the top of the image and run like a fork in the road, splitting to the right and left of the image. At Titan’s chilly conditions, streams of methane and/or ethane might flow across parts of the region. Credit: NASA/JPL.

“This land is heavily tortured, convoluted and filled with hills and mountains,” said Steve Wall, the Cassini radar team’s deputy leader at NASA’s Jet Propulsion Laboratory, Pasadena, Calif. “There appear to be faults, deeply cut channels and valleys. Also, it appears to be the only vast area not covered by organic dirt. Xanadu has been washed clean. What is left underneath looks like very porous water ice, maybe filled with caverns.”

We’re learning more about Titan with every new Cassini pass, and we’ve got 29 more encounters in the next two years, twelve of which will use radar. A hearty well done, by the way, to Cassini scientist Jonathan Lunine (University of Arizona), who keeps the Coleridgean motif going, referring to Titan as “… a land where rivers flow down to a sunless sea.” Coleridge himself was mysterious about the vision that brought him his poem ‘Kubla Khan’ — supposedly the arrival of a visitor knocked him out of his reverie (perhaps an opium dream) leaving the poem forever incomplete — but it was of a place that could have been no more unusual and yet hauntingly familiar than distant Titan.