A Fine Drizzle on Titan

The current issue of Nature features a look at Huygens data with a big payoff: rain is falling on Titan, continues to fall as we speak, and will probably keep falling for a long time. Says Christopher McKay (NASA Ames), a co-author of the paper, “The rain on Titan is just a slight drizzle, but it rains all the time, day in, day out. It makes the ground wet and muddy with liquid methane. This is why the Huygens probe landed with a splat. It landed in methane mud.” All this from low, methane-nitrogen clouds that are barely visible but appear to be widespread, affecting weather globally. A Nature feature on this work, from which the McKay quote is drawn, can be found here.

Methane rains are what you get at temperatures of minus 179 degrees Celsius, as are the river-like features also found by the probe as it descended on January 14, 2005. The latter surely derive from the ceaseless rains as well. McKay says the rain equals roughly two inches a year, about as much as Death Valley gets on Earth, but on Titan the rain falls all year round. All this at the same time that Cassini’s radar images have shown lakes in Titan’s northern hemisphere. We’re talking bodies of water as large as North America’s Great Lakes.

Interestingly, drizzle alone can’t account for the geological features thus far observed on Titan, indicating more substantial rainstorms at other times. And another letter to the same issue of Nature by Ricardo Hueso and Agustín Sánchez-Lavega (University of the Basque Country, Bilbao, Spain) discusses their simulations of Titan’s methane clouds, which found a substantial likelihood of bouts of heavy rainfall during what they depict as severe convective storms. 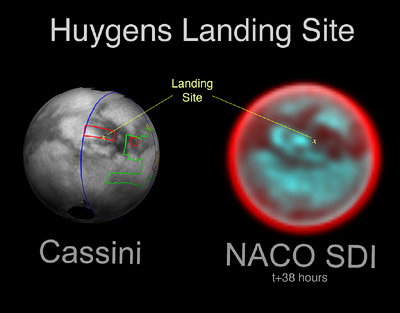 Image: This image provides a comparison between the Huygens landing site on Titan as viewed by the Cassini Imaging Science Subsystem (ISS) and the NACO/SDI instrument mounted on the 8-metre Yepun telescope of the VLT (Very Large Telescope) station, in Chile. Credit: NASA/JPL/Cassini-ISS/Space Science Institute and ESO/NACO-SDI/VLT.

From an ESA news release on the effort:

The radio experiments worked beyond expectations and even proved to be a ‘safety net’ when the reception of Huygens’ second communications channel failed during the descent. The data from several of Huygens’ six experiments was lost, including that required for the Huygens radio experiment to track the winds during the whole descent. The Doppler-tracking data from the Green Bank Telescope (West Virginia, America) and from Parkes (Australia) provided real-time information about the probe’s drift in the winds. The processing of the VLBI data set is not yet completed but initial results look very promising.

The Very Long Baseline Interferometry (VLBI) observations, which included the use of 17 telescopes, should provide a second window on the Huygens’ landing. We already have an exact fix on Huygens touchdown (10.33 degrees south and 192.32 degrees west) from a combination of Cassini and Huygens data. VLBI data will provide an independent reconstruction of the descent sequence.