A Stellar ID Through Microlensing

Gravitational microlensing is a fascinating way to find exoplanets, provided you’re not worried about nearby targets. For the best way to do microlensing of this sort is to work with a crowded starfield, which means looking toward galactic center, where stars are numerous and distant enough that their lensing events can be studied. You’re hoping to find a star that passes in front of another as seen from Earth, in which case the gravity of the foreground star sets up the gravitational lensing effects that magnify the light of the background star.

Thus OGLE-2003-BLG-235L, which displayed a planetary companion that was discovered in 2003 using ground-based observations. The oddity here is that while the planet produced an additional brightening of the background star, thus confirming its existence, astronomers weren’t sure about the identity of the star it circled. It has taken two years and new observations by the Hubble Space Telescope to pin down OGLE-2003-BLG-235L — the foreground star — as the parent star of this particular planet, and to characterize its properties. 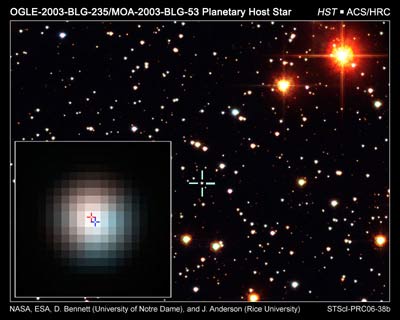 A brief aside on nomenclature: The star’s designation depends on which catalog you use. OGLE-2003-BLG-235L draws on the database of the Optical Gravitational Lensing Experiment (OGLE), while the Microlensing Observations in Astrophysics (MOA) project designates the star as MOA-2003-BLG-53L. MOA is a New Zealand-based microlensing experiment that has been in place since 1995.

In the absence of a more user-friendly name, here’s what we now know about this system: The planet is roughly 2.6 Jupiter masses and in a Jupiter-like orbit around its star. OGLE-2003-BLG-235L itself is 63 percent the mass of our Sun, making it hotter and more massive than the average field star in our galaxy, which is about 30 percent Sol’s mass. The distance from Earth is 19,000 light years. Hubble could distinguish the light of the two stars because the foreground star is a different color than the background one; red and blue filters allowed astronomers to enhance the visibility of the event.