A Novel Strategy for Asteroid Deflection

With the recent knowledge that half of all near-Earth asteroids are binaries, the stakes go up in the race to develop technologies to prevent potential impacts. But is the best solution what Centauri Dreams has always advocated, to intercept the approaching object as far from Earth as possible and alter its trajectory? A new paper suggests an alternative strategy: why not capture a nearby asteroid and put it into an Earth-bound orbit to use as a shield?

Such an asteroid could then be moved as needed to absorb the impact of any collision that would otherwise hit the Earth. The work of Didier Massonnet and Benoît Meyssignac (Centre National d’Etudes Spatiales, France), the paper argues that an asteroid between 20 and 40 meters in diameter, which the two nickname ‘David’s stone,’ could destroy a much larger incoming object under proper targeting conditions. The problem becomes finding the right asteroid. From the paper:

We…have a detection challenge: we seek an asteroid small enough to be manoeuvred “easily”—i.e. within a 10-year time frame and with a typical ΔV which we set at 50 m/s—while large enough to ensure the destruction or the deviation of Goliath. David must be energetically close to the Earth, which means that its initial semi major axis is close to one astronomical unit and its eccentricity as well as its inclination are small. David may be too small to be easily detected by optical means, in addition of being often in the angular vicinity of the Sun. The best way to detect efﬁciently such an asteroid might be by radar survey. 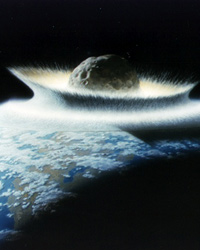 How to capture such an object? The authors point out that in terms of thrust, a large mass with a low ejection velocity is as efficient as a low mass with a large ejection velocity. Their solution is a robotic catapault that collects samples from the asteroid and throws them into space. The propellant becomes the material of the asteroid itself, with solar arrays generating power for the operation. Ingeniously, the paper suggests a ‘hopping’ catapault device that could compensate for the slow rotation of the asteroid while maintaining the average torque delivered to the asteroid close to zero.

Image: Is this a scenario we can prevent? The art of asteroid manipulation near the Earth may hold the answer. Credit: NASA.

And they offer up a good candidate for the David’s stone in the asteroid 2000SG344, whose passage near the Earth in 2029 offers a relatively straightforward capture scenario. On station orbiting either the L1 or L2 Sun-Earth Lagrangian points, the asteroid would protect Earth from incoming material with a reaction time of about eight months. Significant here is that Massonnet and Meyssignac’s method would be the only solution to a short-notice threat such as a cometary nucleus.

Another benefit is that with the installation of proper equipment, a nearby asteroid could be exploited to produce propellants for manned exploratory missions. Producing fuel like liquid oxygen in such a location would dramatically alter the lifting requirements for long-range flights and could be practical even factoring in travel requirements to retrieve the fuel:

This oxygen could then be loaded into the tanks of a planetary mission which would ﬁrst reach an EET [Earth-escape trajectory] toward this Lagrangian gas station and then come back close to the Earth, still on an EET, in the proper position for its ﬁnal acceleration to a planetary trajectory. If a chemical propulsion is used for the exploration of Mars, up to 80% of the mass of the mission could be liquid oxygen, thus offering a similar gain in heavy lifting requirements. The 240-day or so detour to the asteroid does not necessarily apply to the exploration crew which could join the spacecraft when it grazes Earth again on its way back. If necessary, a different crew could manage the reﬁll and enter the earth atmosphere directly on the way back from the asteroid. The cost in ΔV would virtually be zero.

The paper is Massonnet and Meyssignac, “A captured asteroid: Our David’s stone for shielding earth and providing the cheapest extraterrestrial material,” in Acta Astronautica 59 (2006), pp. 77-83.