Ceres and Charon: A Matter of Gravity

Someone with more cultural insight than Centauri Dreams will have to explain why the designation of Pluto as a planet has captivated so large an audience. The issue is front page on my local newspaper this morning and I’m being asked about it by people who have never shown the slightest interest in space exploration. Perhaps it’s the overturning of things memorized long ago, as if someone had changed the multiplication tables, or decided to modify what makes up the letters of the alphabet.

Whatever the case, the IAU’s draft definition seems to lead to a de facto loss of planetary dignity for Pluto even while maintaining its tenuous identification as one of the tribe. For ‘plutons’ — that category to describe planets whose orbits take more than 200 years to complete, with large orbital inclination and eccentricity — will no doubt soon comprise the vast majority of planets as we discover more and more material in the Kuiper Belt. Which will inevitably lead to an accurate sense that the ‘classical’ planets and these other objects are fundamentally different things. 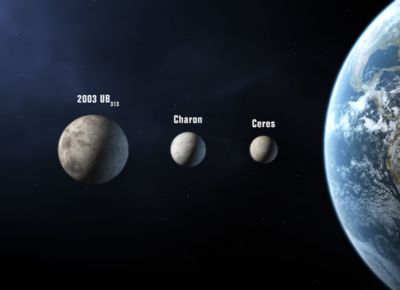 Image: The world’s astronomers, under the auspices of the International Astronomical Union (IAU), have concluded two years of work defining the lower end of the planet scale – what defines the difference between “planets” and “solar system bodies”. If the definition is approved by the astronomers gathered 14-25 August 2006 at the IAU General Assembly in Prague, three of the bodies in the Solar System will be assigned new status as planets: Ceres, Charon (Pluto’s companion) and 2003 UB313. There is no change in the planetary status of Pluto. In this artist’s impression the planets are drawn to scale, but without correct relative distances. Credit: The International Astronomical Union/Martin Kornmesser.

And that brings us to Ceres and Charon, and the useful fact that the proposed IAU definition would rest upon twin conditions for planetary status, neither of which accepts Pluto’s diameter as a criterion:

Which strikes this observer as emminently sensible because it relies on the way objects behave in a solar system environment. As Richard Binzel, a member of the Planet Definition Committee puts it, “Our goal was to find a scientific basis for a new definition of planet and we chose gravity as the determining factor. Nature decides whether or not an object is a planet.” More discussions to follow and perhaps touch-ups to the draft resolution, with a vote to be taken on the 24th.

A later addition for clarity: Pluto and Charon are considered a double planet rather than a planet and its satellite. Why aren’t the Earth and Moon treated the same way? The reason is found in the IAU’s definition of a double planet, which is this: “A pair of objects, which each independently satisfy the definition of ‘planet’ are considered a ‘double planet’ if they orbit each other around a common point in space that is technically known as the ‘barycentre’. In addition, the definition of ‘double planet’ requires that this ‘barycentre’ point must not be located within the interior of either body.” All of which makes Pluto and Charon a double planet but rules out the Earth and Moon as a double.