The FOCAL Mission: To the Sun’s Gravity Lens

One of the great missions for the 21st century could be FOCAL — a space probe sent to the Sun’s gravity lens some 550 AU out. Gravitational lensing is becoming a major tool for astronomers, and we’ve even seen planetary detections using microlensing, looking at targets in the direction of galactic center and the faint changes in light that indicate a planet’s passage. The gravity lens concept, harking back to a 1936 Einstein paper, came to the fore in 1978, when Dennis Walsh and team spotted a twin quasar image, the result of the lensing caused by an intervening galaxy as it bends light around it.

So we know that lensing works. As far as I know, the first person to apply the notion to spacecraft was Von Eshleman (Stanford University), who considered a space probe to 550 AU to exploit the potential magnifications available there. And such missions have also been considered, by Frank Drake among others, as SETI experiments, using the Sun’s ability to magnify the hydrogen line at 1420 MHz, the so-called ‘waterhole’ frequency for interstellar communications.

But no one has put more thought into a FOCAL mission than Claudio Maccone. The Italian physicist led a 1992 conference that investigated mission concepts, and submitted a proposal to the European Space Agency the following year. Since then, he has followed up this work with a series of papers in Acta Astronautica and the Journal of the British Interplanetary Society, investigating among other things the uses of the gravity lens for cosmology (detailed imaging of a small slice of sky to study the cosmic microwave background), communications (using gravity lenses around nearby stars to boost signals from interstellar probes) and astronomy. His 1997 book The Sun As a Gravitational Lens: Proposed Space Missions (Colorado Springs: IPI Press) is an exhaustive analysis of the topic now in its 3rd edition. 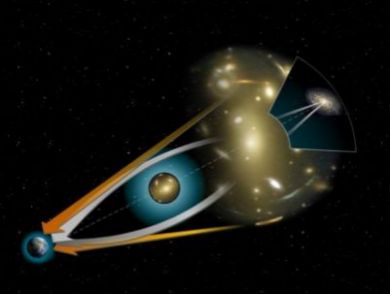 Image: Gravitational lensing at work. A space probe at 550 AU and beyond could exploit such effects to make detailed studies of other solar systems, among numerous other scientific targets. Credit: Martin Kornmesser & Lars Lindberg Christensen, ST-ECF.

In a presentation he will make today at the New Trends in Astrodynamics and Applications conference in Princeton, Maccone notes that the use of stars as gravitational lenses is a logical next step for astronomers. “As each civilization becomes more knowledgeable, they will recognize, as we now have recognized, that each civilization has been given a single great gift: a lens of such power that no reasonable technology could ever duplicate or surpass its power. This lens is the civilization’s star. In our case, our Sun.”

A fascinating aspect of the Sun’s gravity lens is that we do not need to park a spacecraft at 550 AU to utilize it. As the spacecraft pushes past this distance, effects created by the Sun’s corona diminish and imaging only becomes better. We have an opportunity to see images the likes of which could not be produced by ground-based or conventional space-based telescopes, assuming we can find a way to propel a spacecraft to the needed distance in a reasonable amount of time.

If we try to sketch out a rational pattern for exploration beyond Pluto, FOCAL should be front and center in our thinking. New Horizons reaches the Pluto/Charon system in 2015. After that there is active work on Innovative Interstellar Explorer, a probe that would carry instrumentation beyond the heliosphere and become the first mission specifically targeting the interstellar medium. A well-equipped FOCAL probe, driven perhaps by solar sail with close solar flyby, is a logical goal after IIE or as part of a combined mission concept.

But such a mission, the groundbreaker for space-based gravity lens studies, would be the first of many. In particular, as we learn to push spacecraft to truly interstellar speeds, FOCAL becomes a needed precursor that can tell us much about target solar systems. As Maccone notes in The Sun As a Gravitational Lens:

I anticipate that there will be a host of FOCAL space missions launched in all directions around the Sun, each probe launched in the direction exactly opposite to the star to explore with respect to the Sun position….A FOCAL space mission could be used to magnify anything of interest outside the Solar System. One should then say that FOCAL will be used to magnify the nearby planetary systems, meaning not just the nearby stars themselves, but also their planets, halo disks, Oort clouds, etc.

The range of targets is vast if FOCAL-style missions become routine through breakthroughs in our propulsion technologies. In the interim, deep space probes to the required distances offer the possibility of numerous scientific investigations, many of which were first examined by NASA in its studies for the TAU (Thousand Astronomical Units) mission in the 1980s. What Maccone continues to argue forcefully is that any probe into regions beyond the heliosphere will be in position to exploit the gravity lens, and that our designs for such probes should incorporate the needed instrumentation to show us how best to use this tremendous natural tool.