Galileo Weighs in On Planetary Definitions

Centauri Dreams continues to admire the clarity of the draft IAU resolution on the definition of a planet. Although the criteria are easily understood, they also present teaching opportunities (imagine all those schoolchildren learning what a barycenter is, and why Pluto/Charon make a double planet thanks to the location of their center of gravity!). This sound definition also grows from the properties of the planets themselves and is based on the best current information on planetary formation.

Galileo Galilei had some thoughts on naming things that seem apropos, and what better source to consider when defining a planet? The Tuscan astronomer/mathematician (1564-1642) could have been speaking of the current controversy when he said, “Names and attributes must be accomodated to the essence of things, and not the essence to the names, for things come first and names afterward.” I submit that the draft resolution does a fine job accomodating the named thing to its essence — that essence being gravity — despite the occasional oddball result. 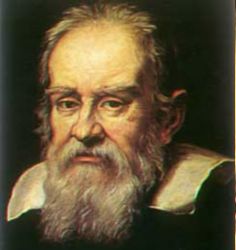 As Greg Laughlin notes, for example, the Moon will become a planet in roughly 3.5 billion years as the barycenter of the system moves above the surface of the Earth (by that time, it will be at a distance of 81.3 Earth radii). Which would create havoc for textbook writers of the far future as they adjust to yet another planet popping into definition, but Laughlin’s genial jeux d’esprit (picked up by CNN here) is a reminder that definitions themselves partake of the arbitrary and almost inevitably produce consequences that give us pause.

Image: Justus Susterman’s 1636 portrait of Galileo. What would the celebrated planetary observer have thought of our current controversy over defining a planet?

So while a Division for Planetary Sciences committee strongly supports the IAU resolution, other opinions are strongly in the other camp, as witness these two from Johns Hopkins, the first from Richard Conn Henry (Department of Physics and Astronomy):

“I think the notion that Pluto is a planet is absurd. When it was initially discovered, it was thought to be vastly more massive than it turned out to be. Its orbit is radically different from that of all the other planets. Down with Pluto, is what I say!”

And then there’s Andy Cheung, from JHU’s Applied Physics Laboratory:

“Yes, keeping Pluto as a planet is the correct decision. However, the new definition of planet does not work for me, because “hydrostatic equilibrium” is an idealization — it is approximately correct for planets like Earth but is not exact. There is still no criterion for deciding how far from hydrostatic equilibrium an object can be and still qualify as a planet. Much of the science of geophysics deals with the different ways, and the reasons why, planets are not quite in hydrostatic equilibrium. Also the suggested term ‘pluton’ is a bad idea, in my opinion.”

Well, he’s got a point about ‘pluton.’ But under the premise that no definition will satisfy everyone, and knowing that the existing definition seems to satisfy few, Centauri Dreams hopes that the IAU resolution will pass so that 1) we can move to a definition that is clear-cut and based on reasonable assumptions and 2) we can get past the naming controversy and move on to more significant topics. But I will say this: anything that can get the planets of our Solar System all over the front page of my local newspaper has to be congratulated for energizing public interest in space in ways even Huygens and Cassini couldn’t.

Previous post: The FOCAL Mission: To the Sun’s Gravity Lens