Astounding in the Glory Years

A recent acquisition has me looking backward rather than forward to begin the week. It’s the January 1940 issue of Astounding Science Fiction, a magazine then in its glory years under the editorship of John Campbell. Some of the authors here ring few bells: Sam Weston, for example, weighs in with “In the Day of the Cold,” as does D.L. James with “Moon of Delirium.” But this is also the issue of Robert Heinlein’s “Requiem,” and it contains good work by Lester del Rey and Edward E. Smith as well. 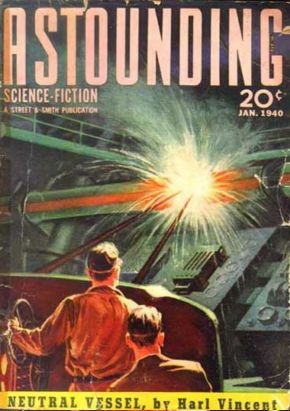 Astounding‘s science articles mixed with its ever reliable stories gave it a special place in the history of the pulp magazines, and many a scientist has told me that it was through Astounding or its later incarnation as Analog Science Fiction & Fact that a career path in physics or astronomy emerged. Which brought to mind science fiction writer Frederick Pohl, a distinguished editor in his own right.

Pohl’s 1978 memoir The Way the Future Was catches the magazine’s exciting heyday. He evokes the old building on Seventh Avenue where Astounding was produced, and recalls “…going up and down staircases, squeezing past rolls of paper stored to feed the ground-floor presses, reveling in the fascinating smells of printer’s ink and rotting wood.” In the passage that follows, Pohl recalls conversations with Campbell and their link to Astounding‘s editorials:

After a few such conversations, and after reading the editorials in Astounding a month or two after each of them, I figured out what was happening. That was how John Campbell wrote editorials. On the first of every month he would choose a polemical notion. For three weeks he would spring it on everyone who walked in. Arguments were dealt with, objections overcome, weak points shored up — and by the end of each month he had a mighty blast proof-tested against a dozen critics.

Every word he said I memorized:

On atmosphere: “I hate a story that begins with atmosphere. Get right into the story, never mind the atmosphere.”

On motivating writers: “The trouble with Bob Heinlein is that he doesn’t need to write. When I want a story from him, the first thing I have to do is think up something he would like to have, like a swimming pool. The second thing is to sell him on the idea of having it. The third thing is to convince him he should write a story to get the money to pay for it, instead of building it himself.”

On rejection letters: “When there’s something wrong with a story, I can tell you how to fix it. When it just doesn’t come across, there’s nothing I can say.”

On plot ideas: “When I think of a story idea, I give it to six different writers. It doesn’t matter if all six of them write it. They’ll all be different stories, anyway, and I’ll publish all six of them.”

On the archetypal sf story: “I want the kind of story that could be printed in a magazine of the year two thousand A.D. as a contemporary adventure story. No gee-whiz, just take the technology for granted.”

That latter item, of all Campbell’s dicta, seems to be the one most followed by modern science ficton, not always to its benefit since it can encourage a needless obscurity. Little of which you will find, it must be said, in today’s Analog, which continues to publish under the editorship of Stanley Schmidt, whose own tenure there is longer than any other editor save Campbell himself. Its science component is still robust, as witness the current issue’s discussion of current technology and interstellar possibilities by Gregory Matloff and Les Johnson.

And as to those old pulp issues like the one in the illustration above, they’re harder and harder to come by (most were destroyed in paper drives during World War II), but a small collector’s market still flourishes online in places like eBay, or at annual gatherings like PulpCon. Faced with a malfunctioning scanner, I poached the image above from the wonderful Pulps & Magazines Americains index of science fiction magazine covers and content. A few moments there, whether you read French or not, will trigger limitless nostalgia.