A Jupiter-sized planet with the density of cork? The idea seems farcical, but it’s under discussion as I write at a news conference held by the Harvard-Smithsonian Center for Astrophysics (CfA). The planet, called HAT P-1, revolves around ADS 16402, a star much like our Sun that is part of a binary system some 450 light years away in the constellation Lacerta. The first planet found by the Hungarian Automated Telescope observing network, HAT P-1 may represent a new class of planet entirely.

For despite a radius of 1.38 times Jupiter’s, HAT P-1 has only half its mass. “This planet is about one-quarter the density of water,” said Gaspar Bakos (CfA). “In other words, it’s lighter than a giant ball of cork! Just like Saturn, it would float in a bathtub if you could find a tub big enough to hold it, but it would float almost three times higher.” Intriguingly, the new world isn’t the first planet with oddly low density. Another planet found by the transit method, HD 209458b, is also about 20 percent larger than predicted by theory. 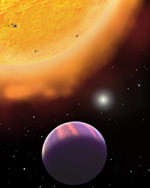 So how do you puff up a planet? Additional heat in its interior would do the job, and that could be accomplished through tidal heating if the planet were titled in a Uranian-style orbit on its side. But that scenario doesn’t seem likely. As Smithsonian astronomer Matthew Holman puts it, “The circumstances required to tip over a planet are so unusual that this would seem unlikely to explain both known examples of inflated worlds.” Another possibility: tidal heating due to an eccentric orbit, but the current observations do not favor this possibility.

Image: The newly discovered world HAT-P-1 has baffled astronomers, since it is puffed up much larger than theory predicts. HAT-P-1 has a radius about 1.38 times Jupiter’s but contains only half Jupiter’s mass. Credit: David A. Aguilar (CfA).

HAT P-1 revolves around its primary once every 4.5 days at a distance twenty times closer to the Sun than the Earth. What we’ll hope to gain from detailed follow-up studies of this bizarre world is new information about how giant planets are formed and evolve. Right now there seem to be more questions than answers, and it will be fascinating to read this work in its entirety when it appears in The Astrophysical Journal. A preprint has just been posted at the arXiv site.

We’ll discuss the second announcement from this morning’s news conference — on biomarkers and the analysis of exoplanet atmospheres — tomorrow.