Finding Biomarkers in an Alien Atmosphere

As planet hunters catalog stellar wobbles and light-curves, some of them are working their way down through the various planetary types aiming at the ultimate discovery, an Earth-like world around another star. And if Lisa Kaltenegger has her way, they’ll be able to tell us something about the existence of life on that planet. Kaltenegger faced a Washington DC audience yesterday to announce a new methodology for examining terrestrial worlds. Unable to be there myself, I attended via a much appreciated Webcast.

Kaltenegger (Harvard-Smithsonian Center for Astrophysics) and Wesley Traub (JPL and CfA) are looking closely at the history of Earth’s atmosphere to understand what happens in the various stages of planetary evolution. The development of life is one of many factors that changed the atmosphere in the past 4.5 billion years. When the day comes that we have spectroscopic data from exoplanets as small as Earth, we’ll be able to study the signatures of the gases there to learn something about conditions on the surface.

Traub puts all this succinctly:

“By studying Earth’s past, we can learn about the present state of other worlds. If an extrasolar planet is found with a spectrum similar to one of our models, we potentially could characterize that planet’s geological state, its habitability, and the degree to which life has evolved on it.”

The researchers have broken Earth’s history down into six epochs, starting in the era 3.9 billion years ago when the atmosphere was primarily nitrogen, carbon dioxide and hydrogen sulfide and a muddy brown ocean covered the planet, warmed by a red sun shining through an orange brick-colored sky. They chart that history through high methane concentrations to the shift in atmospheric balance caused by the production of oxygen, beginning about 2.4 billion years ago. Some 300 million years ago, the atmosphere had reached its current nitrogen/oxygen balance at the beginning of the Mesozoic. 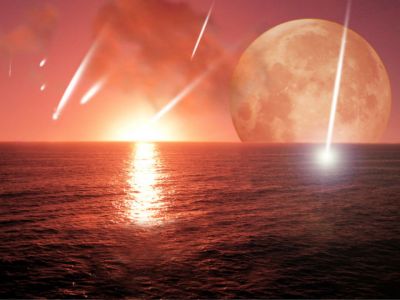 Image: Earth’s early atmosphere of nitrogen, methane and carbon dioxide was hostile to life as we know it, but friendly to the first methane-loving bacteria. Astronomers modeled the history of Earth’s atmosphere to learn what fingerprints to seek on alien worlds. Credit: David A. Aguilar (CfA).

The most intriguing question is this one: Is our present era distinctive enough that astronomers here could detect not just life but signs of a technological civilization on a distant planet? Here we may be moving beyond the capabilities of the Terrestrial Planet Finder and Darwin missions, but much larger space-based arrays of infrared telescopes may one day make it happen.

So we’ll be able to tell a lot about habitability and the existence of life with near-future missions, even if unequivocally spotting an exo-civilization may take a little longer. “As daunting as this challenge sounds,” said Kaltenegger, “I do believe in the next few decades we will know whether or not our little blue world is all alone in the Universe or if there are neighbors out there waiting to meet us.” Which is enough to keep many an exoplanet hunter mining those wobbles and light-curves with renewed enthusiasm.