Brown dwarfs are clearly commonplace in the galaxy, but we know all too little about them. Thus the excitement about the recent imaging of a brown dwarf that orbits its star along with a planet. More information about that dwarf, HD 3651 B, has now surfaced thanks to a preprint passed along by Massimo Marengo (Harvard-Smithsonian Center for Astrophysics), a member of the team that discovered this interesting object. As we saw several days ago in these pages, an independent team led by Markus Mugrauer (University of Jena) has also submitted a later paper announcing the same object. Clearly, this faint brown dwarf has been the subject of much scrutiny, and deservedly so. 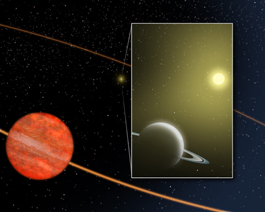 For the primary, HD 3651, has already been subjected to radial velocity analysis, turning up a planetary companion of somewhat less mass than Saturn. Located in the constellation Pisces, HD 3651 is a bit less massive than our Sun, and the behavior of its known planet is unusual — its orbit is highly elliptical, a tip-off that a distant, low-mass companion is affecting its orbit. The research team, led by Kevin Luhman (Penn State) used the Infrared Array Camera aboard the Spitzer Space Telescope to identify that companion as a T dwarf, a cool brown dwarf star about 50 times the mass of Jupiter.

Image: This is an artist’s concept of the star HD 3651 as it is orbited by a close-in Saturn-mass planetary companion and the distant brown dwarf companion discovered by Spitzer infrared photographs. The Saturn-mass planet was discovered through Doppler observations in 2003. Its orbit is very small, the size of Mercury’s, and is highly elliptical. The gravity of the distant brown dwarf companion may be reponsible for the distorted shape of the inner planet’s orbit. Credit: NASA/JPL-Caltech/T. Pyle (SSC).

“The orbit of the planet in this system is similar to Mercury’s, but the T dwarf has an orbit over ten times larger than Pluto’s,” said Brian Patten of the Harvard-Smithsonian Center for Astrophysics (CfA), a co-author. “Although HD 3651 B would be just beyond naked-eye visibility to an intrepid astronomer living on this system’s planet, the T dwarf makes its presence known through gravity.”

A second brown dwarf was found around HN Peg, a young star in the constellation Pegasus. This one is also intriguing because the youth of the star may provide clues to the formation of both objects. HN Peg shows a previously discovered debris disk; the interactions between it and the brown dwarf should provide unusually fruitful. The two dwarf companions thus become the sixth and seventh known T dwarf companions to stars, and the first T dwarfs discovered through Spitzer.

These brown dwarf imaging studies are valuable because with knowledge of the primary star, the age, distance and metallicity of the companion can be more readily measured. As the paper comments:

HD 3651 B is a virtual twin to another T dwarf companion, Gl 570 D, in terms of spectral type, luminosity, mass, temperature, and radius… As with Gl 570 D, these measurements have relatively high accuracy because of the companionship of HD 3651 B to a nearby, well-studied star, making it a valuable brown dwarf for calibrating methods of characterizing the physical properties of late T dwarfs…

Turning up brown dwarf companions thus helps us plug in values on the frequency of companions vs. properties like mass, separation and age, all useful in developing a sound picture of system formation. Moreover, the only previously known T dwarf companions circle stars that are older than one billion years and have no known planets. These helpful discoveries underscore the importance of direct imaging for the study not just of brown dwarfs but planets as well.