Saturn’s Rings in a New Light

The imagery from Cassini’s twelve-hour pass behind Saturn turns out to have been productive indeed. We pause from things interstellar, then, to admire the beautiful photograph below. The occultation of the Sun put the spacecraft in position to see the rings with exquisite and detail-enhancing backlighting, providing striking visual evidence for their extensive interaction with some of Saturn’s smaller moons. 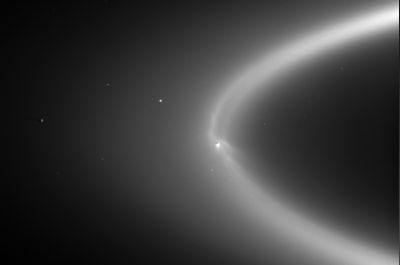 This is Enceladus as we’ve never seen it before, moving through a highly visible E ring, to which it appears connected by feathery strands of ice crystals. These are surely coming from the moon’s south polar geysers, another of Cassini’s remarkable discoveries. No clearer evidence that moons like this one have a role in shaping the rings through which they move could possibly be offered.

It’s the backlighting, of course, that teases out the level of detail in this image, showing microscopic particles that would otherwise be all but invisible. The E ring itself, Saturn’s outermost ring, had only been imaged in sections until now, but the occultation allowed Cassini to map its structure in great detail. Another significant find: a new, diffuse ring found outside the brighter main rings (and inside the G and E rings) that coincides with the orbits of Janus and Epimetheus. Here the process at work seems to involve debris from impacts on the two moons, a stream of fine particles that continue to feed the ring.