Planets in the Galactic Bulge

“Hot Jupiters?” read a recent e-mail. “Who cares about hot Jupiters? What I’m after are planets like Earth, rocky terrestrial worlds.” My correspondent probably feels the same way today, after NASA’s announcement of sixteen new extrasolar planet candidates, all of which fall into the hot Jupiter category and some into an even more bizarre niche — Ultra-Short-Period Planets, or USPPs. One of these star-hugging worlds, called SWEEPS-10, orbits its parent star once every ten hours.

But not so fast. Sure, getting those first terrestrial world detections, presumably through the transit method, is going to be phenomenal, but the steps leading up to that breakthrough are hugely significant. The results announced today didn’t involve nearby stars but were focused on 180,000 stars in the Milky Way’s central bulge, fully 26,000 light years from Earth. And what can be extrapolated from these sixteen planets is that planet-formation isn’t a local phenomenon limited to regions out in the spiral arms.

No, even as we move toward galactic center, we’re still seeing planets. Which is why Kailash Sahu (Space Telescope Science Institute), team leader for the project, said that the Hubble results provided “…very strong evidence that planets are as abundant in other parts of the galaxy as they are in our solar neighborhood.” The area studied with Hubble’s Advanced Camera for Surveys was a field in Sagittarius no bigger in angular size than two percent of the area of the full Moon. Push those numbers out and, for these data alone, you get six billion Jupiter-sized planets in the galaxy at large. 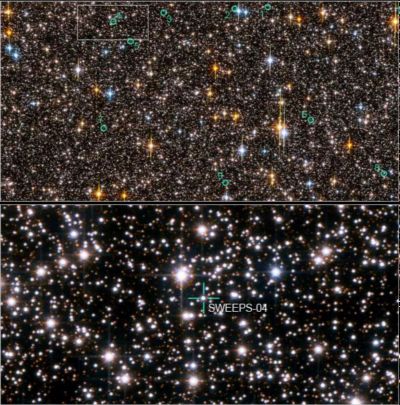 Image: This is an image of one-half of the Hubble Space Telescope field of view in the Sagittarius Window Eclipsing Extrasolar Planet Search (SWEEPS). The green circles identify 9 stars that are orbited by planets with periods of a few days. Planets so close to their stars with such short orbital periods are called “hot Jupiters.” These are considered “candidate” exoplanets because most of them are too faint to allow for spectroscopic observations that would allow for a precise measure of the planet’s mass. The bottom frame identifies one of two stars in the field where astronomers were able to spectroscopically measure the star’s back-and-forth wobble due to the pull of the planet. The planet turns out to be less than 3.8 Jupiter masses. Credit: NASA, ESA, K. Sahu (STScI) and the SWEEPS science team.

And with 24 separate microlensing projects underway in various parts of the world, we’re going to learn much more about planetary systems in the direction of the galactic bulge; the suspicion here is that the six billion figure will turn out to be conservative.

One of the limits of the transit method employed with Hubble is obtaining follow-up mass measurements for such distant objects. Yes, you can see the dimming of starlight caused by the transit, but the SWEEPS team had to rely on the European Southern Observatory’s Very Large Telescope in Chile to make mass measurements using radial velocity techniques. Only two of the sixteen stars in question are bright enough to allow such measurements.

What we do find with the VLT measurements is that one of the planetary candidates has a mass below 3.8 Jupiter masses, while the other is at 9.7 Jupiter masses. And that’s about it — we may not know much yet about these planetary systems, but simply spotting them in these precincts is a reassuring finding that the galaxy houses planets across its range. And keep in mind that we can only use the transit method when a planet crosses the face of its star as seen from Earth.

And how about the big surprise? Five of the new planets represent the hitherto unknown Ultra-Short-Period category, orbiting their stars in less than an Earth day. We see no USPPs in the local neighborhood but the Hubble data suggest they need tiny red dwarf stars, much smaller and cooler than the Sun, to exist. Such close migrations would surely disrupt gas giant planets around larger, hotter stars.

A final thought that we occasionally kick around here: The new work shows planet candidates that appear around stars abundant in elements heavier than hydrogen and helium. Thus the metallicity question, in this light, comes back to stars rich in heavy elements (i.e., of high metallicity) being the breeding ground for planetary systems. How that metallicity correlation holds up as we continue to push the extrasolar hunt deeper into the Galaxy will be fascinating to see.

Next post: A Nearby Supernova and the Birth of the Sun