Epsilon Eridani was a magic name in my childhood, so convinced was I that the nearby star (10.5 light years from Earth) was orbited by planets. Now the Hubble Space Telescope has weighed in with definitive evidence for the existence of at least one of those worlds, a Jupiter-class gas giant in a 6.9 year orbit around the star. The planet was originally detected in 2000 by radial velocity measurements, but there was still the faint possibility that turbulence on the star itself might mimic a planet’s effects.

Now we know that wasn’t so. G. Fritz Benedict and Barbara McArthur (University of Texas at Austin) led the team that announced the result. Those stellar wobbles tell an unmistakable story when observed over time. Here’s Benedict on the matter:

“You can’t see the wobble induced by the planet with the naked eye. But Hubble’s fine guidance sensors are so precise that they can measure the wobble. We basically watched three years of a nearly seven-year-long dance of the star and its invisible partner, the planet, around their orbits. The fine guidance sensors measured a tiny change in the star’s position, equivalent to the width of a quarter 750 miles away.”

No atmospheric effects there. Epsilon Eridani b is the real deal, an observation confirmed by combining the Hubble data with studies from a variety of telescopes made over the past 25 years. The work is precise enough that we not only have a confirmed detection but also a good read on the planet’s mass, which is found to be 1.5 times that of Jupiter. The planet moves at the same 30 degree tilt to our line of sight as the dust and debris disk surrounding Epsilon Eridani. 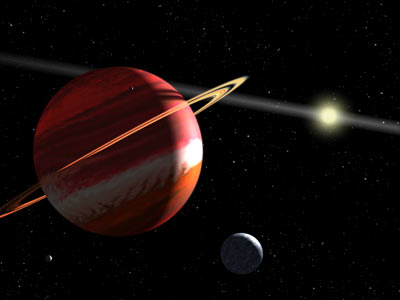 Image: NASA’s Hubble Space Telescope, in collaboration with ground-based observations, has provided definitive evidence for the existence of the nearest extrasolar planet to our solar system. The Jupiter-sized world orbits the Sun-like star Epsilon Eridani, which is only 10.5 light-years away. The results are being presented at the 38th Annual Division of Planetary Sciences Meeting in Pasadena, Calif. and will appear in the November issue of the Astronomical Journal. This is an artist’s concept of the Jupiter-mass planet orbiting the star. Credit: NASA, ESA, and G.F. Benedict (University of Texas, Austin).

Remember, this is a relatively young star, roughly 800 million years old, so its debris disk is still robust. Now we have a confirmed planet and a debris disk around the same star, compelling evidence that planets do indeed form out of such disks. The really exciting part? Hubble has a fighting chance to get an image of this planet in 2007, and so do other space-based cameras and even ground observatories. It will then be at periapsis — its closest approach to Epsilon Eridani — shining brightly in reflected starlight.