Watching the Weather on Upsilon Andromedae b

Imagine being able to measure day and night temperatures on a planet circling another star. That’s just what the Spitzer Space Telescope has managed, homing in on the atmosphere of Upsilon Andromedae b, a ‘hot Jupiter’ orbiting its parent star every 4.6 days. The results are, as you might expect for a planet this close to its star, extreme. The temperature difference between the two sides of this world is a whopping 1400 degrees Celsius (2550 degrees Fahrenheit).

We’re looking at a planet that seems to be tidally locked to the star it circles, but unlike other tidally locked objects like our Moon, this one has a thick atmosphere that could be circulating faster than the interior. The scientists behind this work are essentially doing meteorology, as witness this remark by Joe Harrington (University of Central Florida):

“This planet has a giant hot spot in the hemisphere that faces the star. The temperature difference between the day and night sides tells about how energy flows in the planet’s atmosphere. Essentially, we’re studying weather on an exotic planet.”

Exotic is right — fire and ice — but the hard facts are presented in the paper for which Harrington is lead author, published online yesterday in Science. Upsilon Andromedae is known to have three planets; the one under study is at least 0.69 as massive as Jupiter, and the authors describe their work on its properties as “…the first demonstration that such planets possess distinct hot substellar (day) and cold antistellar (night) faces.” 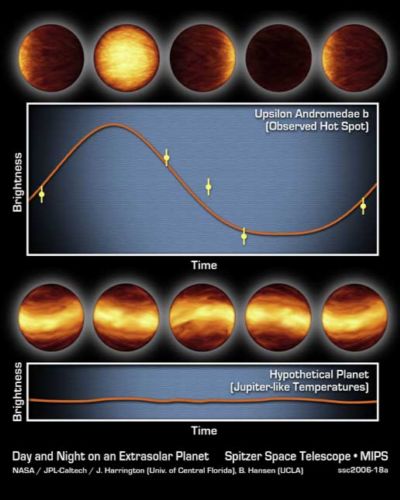 Image: Spitzer was able to determine the difference in temperature between the two sides of this planet by measuring the planet’s infrared light, or heat, at five points during its 4.6-day-long trip around its star. The temperature rose and fell depending on which face, the sunlit or dark, was pointed toward Spitzer’s cameras. Those temperature oscillations are traced by the wavy orange curve. They indicate that Upsilon Andromedae b has an extreme range of temperatures across its surface, about 1,400 degrees Celsius (2,550 degrees Fahrenheit). This means that hot gas moving across the bright side of the planet cools off by the time it reaches the dark side. Credit: NASA/JPL-Caltech/Univ. of Central Florida.

Notice the bottom graph in the image above. It’s what you would have expected to see if this ‘hot Jupiter’ were circled by bands of different temperatures, like our own Jupiter. The Spitzer data show that, for Upsilon Andromedae b at least, the temperature differences between day and night side are profound. This is an atmosphere that is apparently able to absorb and reradiate sunlight fast enough that the gas enveloping the planet cools off quickly.

Studying how the Upsilon Andromedae system dims and brightens in synch with the gas giant’s orbit made these results possible. The changes in heat result from the planet’s varying faces as presented to Spitzer on the line of sight to Earth. It’s stunning work, found in Harrington et al., “The Phase-Dependent Infrared Brightness of the Extrasolar Planet Upsilon Andromeda b,” with abstract available here.