Among the plans for NASA’s Wide-field Infrared Survey Explorer (WISE) is a research agenda some of us have been hoping for for years. Designed to scan the entire sky in infrared light, the spacecraft should be able to locate nearby brown dwarfs. The possibility that one or more of these dim objects might actually be closer to us than Proxima Centauri cannot be ruled out, and if we were to find a brown dwarf one or two light years away, it would inevitably become the subject of mission speculation for next generation technologies.

Not that we know how to travel even one light year in a reasonable amount of time, but halving the distance to the nearest star would surely make such a mission more tenable. Note the progression: We’re already flying our first Kuiper Belt mission, if you take into account the plan for New Horizons to investigate icy objects beyond Pluto. We’re putting together mission concepts like Innovative Interstellar Explorer that could push well outside the heliosphere. Our studies of the Kuiper Belt lead eventually to the gravity focus and missions like Claudio Maccone’s FOCAL, designed to take advantage of the Sun’s lensing effects to study remote objects whose light is focused by gravity.

The Oort Cloud, which may extend as far out as a light year, is the domain of the long-period comets. And perhaps a brown dwarf? Assuming the primary Centauri A and B stars have a cometary cloud of their own, Proxima Centauri is well within it. Proxima is a larger, M-class red dwarf, but it reminds us that finding a dim object even in the local neighborhood would not be a surprise. Take into account possible brown dwarfs and you paint a picture of interstellar space that is far from empty. The exciting thing is that we don’t know much about brown dwarfs and can only speculate as to their numbers. Some researchers think they’re all over the sky:

“Brown dwarfs are lurking all around us,” said Dr. Peter Eisenhardt, project scientist for the mission at NASA’s Jet Propulsion Laboratory, Pasadena, Calif. “We believe there are more brown dwarfs than stars in the nearby universe, but we haven’t found many of them because they are too faint in visible light.”

More brown dwarfs than stars… It’s quite a thought, and add to it that brown dwarfs seem to be able to support planetary systems of their own. The Spitzer Space Telescope has made those findings possible, and WISE will add significantly to our knowledge of the nearby infrared universe, not to mention what it might reveal about distant galaxies shrouded in dust. The image below, taken from the 2 Micron Sky Survey, gives a glimpse of what infrared imaging on a wide scale can accomplish. Be sure to click to enlarge this one for a breathtaking view. 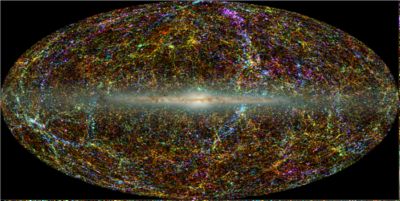 Image: Panoramic view of the entire near-infrared sky reveals the distribution of galaxies beyond the Milky Way. The image is constructed from the more than 1.5 million galaxies in the 2MASS Extended Source Catalog (XSC), and the nearly 500 million Milky Way stars in the 2MASS Point Source Catalog (PSC). The galaxies are color-coded by their distances inferred from their photometric redshift (def.) deduced from the K band (2.2 microns) or as given in the NASA Extragalactic Database (NED). Blue are the nearest sources (redshift < 0.01); green are at moderate distances (0.01 < redshift < 0.04) and red are the most distant sources that 2MASS resolves (0.04 < redshift < 0.1). Credit: Two Micron Sky Survey (2MASS). And for those of you who remember IRAS -- the Infrared Astronomical Satellite launched in 1983 -- WISE will be 500 times more sensitive. Launch is expected in 2009, but to follow WISE news in the interim, keep an eye on its news page.