Titan’s atmosphere may be telling us something about conditions on the early Earth. It’s thick and filled with interesting things like organic aerosol particles that form through the reaction of sunlight with methane gas. Translate that into terrestrial terms and you get a similarly hazy early Earth whose surface receives more than 100 million tons of organic materials every year. “As these particles settled out of the skies, they would have provided a global source of food for living organisms,” said Melissa Trainer (University of Colorado – Boulder). 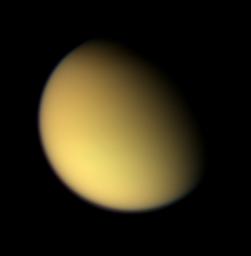 Trainer is principal author of a new paper that examines the chemical qualities of these aerosol particles in the laboratory, studying their chemical composition, size and shape. The method: expose a mixture of methane and nitrogen to ultraviolet light, then add carbon dioxide to see if organic haze forms. And indeed, the haze forms readily in a wide range of methane and carbon dioxide concentrations. That smoggy sky over Titan may be similar to the haze that hung over the Earth for millions of years as the conditions for life emerged.

Another benefit of the haze layer would be protection, shielding primitive organisms from ultraviolet light from the Sun and helping to stabilize the early climate. “It’s somewhat similar to the smog in Los Angeles,” adds Trainer. “Today’s haze on Earth is also created photochemically, which means sunlight powers chemical reactions in the atmosphere. However, the early atmosphere of Earth had different gases present, so chemical composition of the early haze is very different than the haze we have today. There also would have been a lot more of it.”

The paper is Trainer et al., “Organic Haze on Titan and the Early Earth,” accepted for publication in Proceedings of the National Academy of Sciences. The study was performed for NASA’s Astrobiology Institute.