A New Model for ‘Cold Faithful’

It would be easy to keep this site filled with outer Solar System news, so various and captivating are the images that stream in from our spacecraft. Exoplanet studies keep us focused primarily on nearby stars, but I do want to keep up with Cassini, and decided some time back that Centauri Dreams would leave inner system coverage to others and pick up the pace as we moved to Saturn and beyond. And what a story keeps unfolding there.

For Cassini remains healthy and the news from Enceladus intriguing. We’ve known since last year about the plume erupting on the satellite, leading to speculation of liquid water beneath the ice of its surface. The south polar region of the tiny moon is geologically active in ways that challenge the imagination. After all, isn’t the rest of Enceladus as cratered and ancient-looking as the surface of our own Moon? 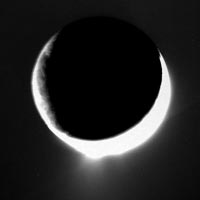 The ‘Cold Faithful’ model, which patterned the Enceladus geyser on Yellowstone’s Old Faithful, has apparently run into problems. Susan Kieffer (University of Illinois at Urbana-Champaign) is lead author of a paper in Science that points to the issue at hand: 10 percent of the plume is made up of carbon dioxide, methane and nitrogen. Says Kieffer: “You might get a carbon dioxide-driven liquid geyser there, but you can’t put this much nitrogen and methane into liquid water at the low pressures found inside Enceladus.”

No liquid water beneath the ice? Kieffer’s alternative depends on clathrate — an ice phase of nitrogen and methane in frozen water. Put those plume gases in a reservoir of clathrate in Enceladus’ southern polar region and the environment could be up to 100 degrees Celsius colder than liquid water, with the plume bursting directly from the clathrates. Fractures at the pole would cause the clathrates to decompose violently. “Some ice particles and ice coatings,” adds Kieffer, “evaporate to produce the water vapor observed with the other gases.”

Did I say geologically active? According to this theory, Enceladus’ ice cap could be opening and closing continuously. And stepping back from Enceladus, consider that our exploratory spacecraft uncover the unexpected at almost every destination. Who knows what New Horizons will find at Pluto/Charon? We can assume that, just as Cassini has done at Enceladus, and Voyager when it found Triton’s strange, geyser-like eruptions, New Horizons will uncover something that will force a re-thinking of the physical processes at work in the outer Solar System.