Probing the Spaces Without and Within

Now here’s a grand idea for a book: describe propulsion systems that can propel spacecraft with little or no fuel onboard. That’s just what Greg Matloff and NASA’s Les Johnson are doing with their new title Living Off the Land in Space (Copernicus & Praxis), which should be available come January. Matloff (New York City College of Technology) is well known in these pages as the co-author of The Starflight Handbook: A Pioneer’s Guide to Interstellar Travel (Wiley, 1989). It’s the seminal text, the one interstellar buffs return to again and again for the broad view of the kinds of technologies that might eventually get us to the stars.

Matloff produced The Starflight Handbook with the late Eugene Mallove and went on to write Deep Space Probes (Springer/Praxis 2000), now in its second edition. His new book with Johnson grows out of their work together in Huntsville at NASA’s In-Space Propulsion Technology Program, where mission concepts include everything from solar sails to solar electric, nuclear electric and other propulsion options. Can we one day make sails big enough to carry generation ships to other stars? Perhaps, but for now space trials of sail designs are what we shoot for, and even those are at least a decade off. That doesn’t stop the work from continuing. 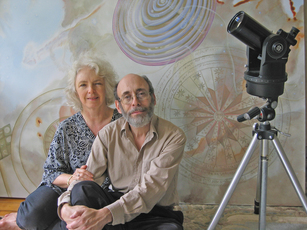 If you’ve read The Starflight Handbook, you’ve seen the fine illustrations created by Greg’s wife C Bangs. Her work is exhibited on four continents as well as online, and she has appeared in numerous publications as well as doing work for a variety of NASA reports and workshop proceedings. I remember a wonderful dinner in Princeton with Greg and C where the discussion ranged from solar sails to the fascinating work going on at Princeton’s Engineering Anomalies Research program, where C had spent the afternoon.

For this is an artist whose fascination with the physics of consciousness propels her work. Her collaboration with the late Evan Harris Walker on quantum consciousness led her to incorporate his equations into many of her paintings, blending mythology with technology in absorbing ways. But this artist looks outwards as well as in. Her technology demonstrator of a rainbow hologram message plaque is a case in point. It could one day fly on an interstellar solar sail (think of the plaque on Pioneer), using images of the human form, a diagram of the Solar System and various equations describing the sail’s mission. That one grew out of a 2004 NASA grant.

Bangs’s “Dying/Evolved Star” paintings were recently exhibited in Brooklyn. And if you make the trip to Huntsville, you can view her holographic designs on display at Marshall Space Flight Center, where Les Johnson has the pleasure of seeing them every day. I like what Matloff says about his relationship with Bangs: “We sometimes edit each other’s writing, and that can add sparks — but in this case they’re good ones. We’re generally working from different hemispheres: C is very much tapped into the left and I, the right.”

That seems like a solid combination to me. You should hear these two in conversation — the ideas are electric.

As to Matloff’s current work, he’s active with both NASA and the Italian space program and continues research on solar sail technologies. And talk about living ‘off the land’ — Matloff and Johnson have kicked around concepts for using large solar sails embedded with electrodynamic tethers to propel spacecraft deep into the Solar System, drawing on the magnetic fields around the destination planets to capture them into orbit. That’s living with little fuel indeed, and less is more when it comes to deep space, where minimizing your fuel consumption pays off in bigger and better payloads.