The Darkening of Centauri A

Take a look at the image of Alpha Centauri in the Centauri Dreams logo. It’s the bright object at far left, not the single star that it appears but a triple system whose glare masks its two major components. Centauri A is a G2 star much like our Sun, while Centauri B is a K1. The two are separated by an average of 23 AU, with an orbital period of some eighty years. Indiscernible in the image is Proxima Centauri, an M-class dwarf which is actually the closest star to Earth.

Bright, nearby and highly studied, the Centauri stars would seemingly be well characterized. But new results from the European Space Agency’s XMM-Newton x-ray satellite show anomalies. Unlike optical wavelengths, where the larger Centauri A dominates, Centauri B is the brighter object in x-ray emissions. What’s odd is that repeated monitoring of the two by XMM-Newton shows that Centauri A faded by no less than an order of magnitude in x-rays during the two-year observing range, a behavior out of keeping with all prior observations of the star at these wavelengths.

Below are side by side views of Centauri A and B in x-ray wavelengths. Note in the image on the left that Centauri A shows up just above and left of the brighter Centauri B in these wavelengths. The later image, on the right, shows a dramatic drop in x-ray brightness. 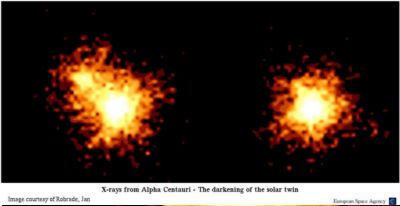 Image (click to enlarge): Two EPIC MOS images of Alpha Centauri A+B, taken in March 2003 (left) and Feb. 2005 (right). The separation of Alpha Centauri A+B is in March 2003 around 12″, in Feb. 2005 somewhat above 10″. Alpha Cen B is the X-ray brighter object down right and exhibits a comparable X-ray luminosity in both exposures. In contrast Alpha Cen A, a star very similar to our Sun, is only visible in the left image. It has fainted in X-rays by at least an order of magnitude, a behaviour never observed before despite several observations of the Alpha Centauri system over the last 25 years. Image and caption credit: Robrade, Jan and ESA.

From a recent paper on this work:

…a strong decrease of the total emission measure is necessary to explain our ﬁndings. While smaller differences in the long term evolution of X-ray luminosity may be explained by the use of the various instruments, the decline seen over the XMM-Newton campaign can only be explained by a X-ray activity cycle or an irregular event. While no deﬁnite statement can be made about an irregular event, the scenario of an activity cycle would require, that all previous X-ray measurements were made when α Cen A was near the ’high state’ of its cycle. Putting all the observation dates together, this would require a cycle with a duration of ~ 3.4 years from maximum to maximum.

A definitive statement on the cause of this x-ray ‘fainting’ is impossible without further data. We do know that our own Sun has a coronal activity cycle with a period of some eleven years. Centauri A’s similarity to the Sun makes further study of Solar x-ray emissions a possible key to the mystery, but it seems remarkable that such a cycle would have gone unnoticed until now. It will be interesting to see what this ongoing observation program comes up with next. Also interesting: the XMM-Newton work has observed a flare on Centauri B, confirming its nature as a flare star.

The paper is Robrade et al., “X-rays from Alpha Centauri – The darkening of the solar twin,” accepted by Astronomy & Astrophysics, with preprint available online. Thanks to Ian Jordan (Space Telescope Science Institute) for the heads-up on this work.