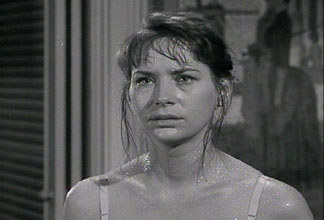 A recent post by Greg Laughlin on his systemic site triggers memories of a Twilight Zone episode called ‘The Midnight Sun.’ Laughlin (UC-SC) was speculating about what would happen to the Earth’s orbit if the Solar System were disrupted by another star. That inevitably called up the still vivid image of two women sweltering in a New York apartment (one of them, the actress Lois Nettleton, is pictured above). The plot: The Earth has moved closer to the Sun, and all hell is about to break loose.

“The word that Mrs. Bronson is unable to put into the hot, still, sodden air is ‘doomed,’ because the people you’ve just seen have been handed a death sentence. One month ago, the Earth suddenly changed its elliptical orbit and in doing so began to follow a path which gradually, moment by moment, day by day, took it closer to the Sun. And all of man’s little devices to stir up the air are now no longer luxuries – they happen to be pitiful and panicky keys to survival. The time is five minutes to twelve, midnight. There is no more darkness. The place is New York City and this is the eve of the end, because even at midnight it’s high noon, the hottest day in history, and you’re about to spend it in the Twilight Zone.”

‘The Midnight Sun’ ran on November 17, 1961, and absorbing as it was (with a true Twilight Zone twist at the end), this ‘minor exercise in the care and feeding of a nightmare,’ as Serling called it, left a major question unanswered. Exactly how did the Earth leave its stable orbit and begin its lethal migration? Laughlin tackles that question. He works out the odds (drawing on a paper he wrote with Fred Adams) that Earth’s orbit might be altered sometime between now and the transformation of the Sun into a red giant.

The result: There is a one in 200,000 chance that the Earth’s orbit will be seriously disrupted in that period. And the chance of capture to another star before the Sun destroys our biosphere is about one in 2,000,000. If we’re captured to a red dwarf, we can look forward to about a trillion years of stable stellar luminousity. It’s an intriguing scenario whose details are sketched on systemic and fully developed in the earlier paper. That study is Laughlin et al., “The frozen Earth: Binary scattering events and the fate of the Solar System,” Icarus Vol. 145 (2000), pp. 614-627. The online reference is here.

One in two million makes for some long odds. But as Laughlin adds, “…people regularly line up to buy powerball tickets with far less chance of striking the jackpot. After all, someone’s gotta win.” I suspect we’ll be coming right back to systemic, since its next post is to be by Paul Shankland, who will report on his work on habitable planets around low-mass stars. And as long-time readers know, habitability around M dwarfs is a continuing preoccupation here.