A Defense Against Planetary Attack

Normally the term ‘planetary defense’ conjures up images of an incoming asteroid, spotting (let’s hope) way out in the Solar System. The defense mounted against pending disaster might involve nudging the asteroid gently out of its current trajectory so that it misses the Earth. Various scenarios come to mind for managing this, but all involve getting to the dangerous object in plenty of time so that technologies not so different from what we have today will be effective at ending the threat. 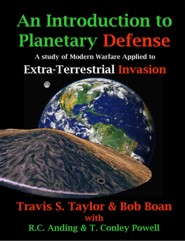 With that in mind, I did a double-take when I saw the cover of An Introduction to Planetary Defense, by Travis Taylor, Bob Boan, Charles Anding and Thomas Conley Powell. The book, published by BrownWalker Press at the end of 2006, bears this subtitle: A Study of Modern Warfare Applied to Extra-Terrestrial Invasion. A jeu d’espirit based on SF themes? Hardly. The authors are familiar names whose work has resonance.

Taylor, for example, has worked for NASA and the Department of Defense for sixteen years and has collaborated on interstellar topics with Greg Matloff. Powell is senior scientist for BAE Systems in Huntsville and is an expert on space trajectories, attitude dynamics and orbital mechanics. I’m less familiar with Boan and Anding, but each seems to have experience in space systems. So when this group tackles extraterrestrial invasion, they do it soberly, with a hard look at strategies, tactics, and weapons that might be used if the longshot scenarios of some science fiction authors — or even B-grade movie directors — ever become reality.

You can find excerpts from the book at the publisher’s website, from which I’ve extracted the introduction and part of the first chapter as I wait for my copy to arrive. Interestingly, the authors take a hard look at the Drake Equation in that section, and also ask how long any civilization could remain hidden from a more advanced culture. We’ve discussed that question in these pages before, in reference to Earth’s everyday electromagnetic radiation and whether radio and TV broadcasts from the past seventy-five years would be detectible from nearby stars, with the general consensus being that such a detection is highly unlikely.

But what about other forms of detection? These writers doubt that any civilization could remain hidden for long. Here’s an excerpt about just one reason, the advent of new imaging and telescope technologies:

Recently in his book The Sun as a Gravitational Lens: Proposed Space Missions, Claudio Maccone, a space scientist at Alenia Aerospazio in Turin, Italy, suggests implementing the sun’s gravitational lensing effect (as predicted by Einstein’s General Theory of Relativity) in a telescope. In other words, the Sun could be used as a lens producing an aperture the diameter of the sun. Its focus is at about six hundred astronomical units away. If the proper equipment were placed at the Solar focus, extremely detailed images of extra-solar planetary surfaces could be captured. Civilizations only moderately more advanced than we are could quite possible implement such a telescope. Therefore, even quiet civilizations could be seen through such a telescope. Eventually, detection of such civilizations may not depend on their directly communicating with us by sending signals. The lght from their star boucning off of their alien rooftops and then onward to our giant telescope may be enough.

Hence the conclusion: All intelligent civilizations will eventually be detectable by more advanced cultures. That’s an interesting value to plug into the Drake Equation! Developing the statistics on probable life elsewhere makes the book’s point — we have no real notion of how such civilizations might deal with us, and should learn the lessons of history by way of developing a strategy for dealing with unexpected arrivals. Based on its first chapter, this book seems to be stuffed with interesting notions. Between it and Michaud’s Contact with Alien Civilizations, we’ll have plenty to read and discuss on potential SETI outcomes.