A World Lit by Three Suns 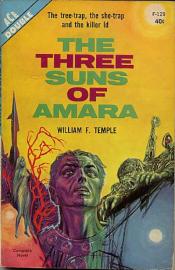 Habitable planets in multiple star systems are one of science fiction’s great tropes. Find a second star somewhere in the daylight sky and you know you’re not in Kansas anymore. It makes slow going today, but as a kid I was struck with William F. Temple’s The Three Suns of Amara (1962), a story whose questionable science and creaky plot was somewhat mitigated by its striking imagery. For Amara managed to weave its orbit through a triple star system in which each star was a different color. Talk about great visual effects!

Image: My battered copy of Temple’s The Three Suns of Amara, rescued from a closet. Not the best novel I’ve ever read, but it did instill a lifelong fascination with habitable planets in multiple star systems.

Yesterday we looked at Elisa Quintana’s work on habitable planets in binary systems, and while reviewing for that story, I found Temple’s Amara again coming to mind. For it turns out we do have five confirmed exoplanets known to orbit one member of a triple star system. Quintana’s paper discusses the planet HD 188753 Ab, for example. It has a minimum mass 1.14 times that of Jupiter and orbits its primary (slightly over one solar mass) in a tight 3.35 day orbit.

Now get this: Around this star/planet duo orbits a short period binary star system (total mass 1.63 that of the Sun) that comes as close as 6 AU to HD 188753 A. Just how this system evolved its planets is a fascinating speculation, one that will receive much study as we learn more about it, especially as to the existence of other planets there. Amara it’s not, but the exoplanet around HD 188753 A has a lot to tell us. The tight passage of the binary pair offers us a unique laboratory for planet formation.

Three other exoplanet systems, though not triple, are intriguing because their stellar separations are well within the dimensions of our own Solar System. GJ 86 is a binary star with stellar separation somewhere around 20 AU, a situation paralleled by Gamma Cephei and HD 41004. So far we only know about giant planets in these systems, but as we saw yesterday, the separation between each of these stars does allow for planets in their habitable zones, making those SF-style speculations about day and night sky scenarios come inevitably to mind.

I should also mention that Gamma Cephei has been the object of recent study by Philippe Thebault and collaborators. Simulations building from small planetesimals up to Mars size worlds show favorable results, which is not to say that there are terrestrial worlds here but that we’re beginning to work out the parameters of how planets form in complex stellar environments involving more than one star. The paper is Thebault et al., “Planetary formation in the Gamma-Cephei system,” Astronomy & Astrophysics 427 (2004) pp. 1097-1104, available online.