When I interviewed the Jet Propulsion Laboratory’s James Lesh several years ago, he explained how space scientists could use radio signals to do science. It’s the ultimate technique for taking advantage of what’s at hand. If your spacecraft is moving behind a planet it’s investigating as seen from Earth, the changes to its signal as it disappears behind the disk tell you much about the composition of the planetary atmosphere. “One person’s noise,” said Lesh, “is another person’s signal.”

Of course, that kind of work isn’t limited to radio. Twice on November 14, 2003 Titan passed in front of a star, the events separated by just seven and a half hours. As you would expect, the occultation tracks were different, one visible from the Indian Ocean and southern Africa, the other from the Americas and western Europe. The effects of Titan’s atmosphere on the starlight have, in each case, supplied information about the movement of gases around the frigid world.

This work required observations from multiple locations, because what astronomers were looking for was the shape of the light focused by the gaseous lens of the atmosphere. “It is like the light falling through a glass of water and making bright patterns on the table. The focused light is not perfectly round because the glass is not a perfect lens,” says Bruno Sicardy (Observatoire de Paris). The triangular shape observed indicated an expected flattening of the atmosphere at the north pole, where warmer air from the south was cooling and sinking toward the surface. 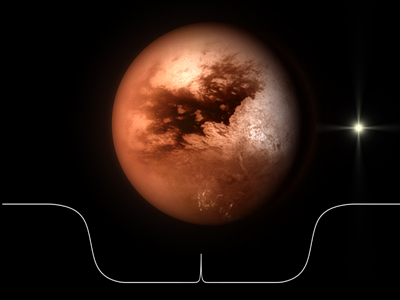 Image: This artist’s impression shows the ‘light curve’ produced by a star passing behind Titan. When such occultation events take place, the light from the star is blocked out. Because Titan has a thick atmosphere, the light does not ‘turn off’ straight away. Instead, it drops gradually as the blankets of atmosphere slide in front of the star, as the light-curve drawn here shows. The way the light drops tells astronomers about the atmosphere of Titan. Credit: ESA. Image by C.Carreau.

The other discovery: a fast jet stream moving at about 720 kilometers per hour. The finding was quickly put to practical use, for the team was able to predict a temperature inversion near 510 kilometers altitude. Fourteen months later, the Huygens probe picked up the jolt of that layer on its accelerometers at precisely the suggested altitude, a validation of what James Lesh calls ‘light science.’ And while this finding relied on chance occultations, we’ll see spacecraft use targeted laser signaling for investigations of planetary atmospheres in the not distant future.