Centauri Dreams‘ view is that the more we can learn about asteroids, the better. And the interest isn’t purely scientific. One day we may have to set about nudging an approaching asteroid so as to prevent a collision with Earth, and if that day comes, we’ll need to have a plan in place that depends upon a thorough understanding of these objects and their composition. In the long run, asteroid studies are anything but optional.

The European Space Agency’s Rosetta mission is filling in some of the gaps enroute to comet 67P Churyumov-Gerasimenko. In its sights are two asteroids — 2867-Steins and 21-Lutetia — orbiting between Mars and Jupiter. We’ll learn a lot more about both between now and July of 2010, by which time Rosetta will have viewed each at close range.

Meanwhile, the spacecraft has taken a first look at 21-Lutetia using the onboard OSIRIS (Optical, Spectroscopic, and Infrared Remote Imaging System) instruments. At the time of its observations, the vehicle was roughly 245 million kilometers from the asteroid, which shows up as little more than a bright spot in the early imagery. 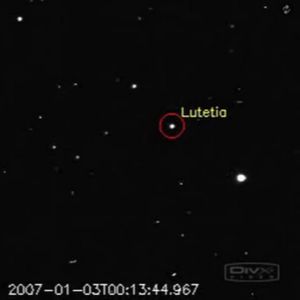 So what is Rosetta up to here? The early observations are intended to study the rotation of the 100-kilometer object, analyzing the changes in the intensity of light reaching the instrument. Up next for Rosetta: a swing past Mars that will slingshot the spacecraft toward Earth for yet another gravity assist this coming November. The ultimate objective when the comet is reached is to land a probe on the surface of 67P/Churyumov-Gerasimenko, followed by a two year study.

Image: Asteroid 21-Lutetia, as seen by the spacecraft from a distance of about 245 million kilometres, during a remote-sensing observation campaign of this object that lasted 36 hours. Click on the image to see ESA’s animation of the observing session (and note the occasional flashes, which are the result of cosmic rays hitting the OSIRIS detectors). Credit: ESA/MPS/UPD/LAM/IAA/RSSD/INTA/UPM/DASP/IDA.