Actually seeing something is so much more rewarding than just inferring its presence. But in the case of exoplanets, looking at the actual light bouncing off a distant planet does more than just satisfying our curiosity. Starshade concepts and other methods of terrestrial planet detection point to an ultimate payoff: We want to analyze the light of a distant world to learn what elements are found in its atmosphere. These become clues to conditions there, and even markers of possible life.

Centauri Dreams readers know I’m a great admirer of the starshade concept, not only as developed by Webster Cash in his New Worlds Imager designs but also as widely studied for other possible missions (for more on starshades, see the UMBRAS site). Starshades are all about direct observation — images, spectroscopy, photometry — rather than methods like radial velocity studies that find planets through the motions of their parent stars. And I like starshade technologies because they seem to offer better light suppression than internal coronagraph designs.

But until we’re flying spacecraft capable of detecting exoplanetary atmospheres directly, it’s satisfying to see the strides we’re making with existing equipment. A set of observations made in 2003 with the Hubble Space Telescope, for example, has provided spectroscopic data for HD 209458b, a transiting exoplanet so close to its star that it completes its orbit every 3.5 days. A ‘hot Jupiter,’ HD 209458b is actually streaming hot gases into space as it orbits just 4.7 million miles from its host. 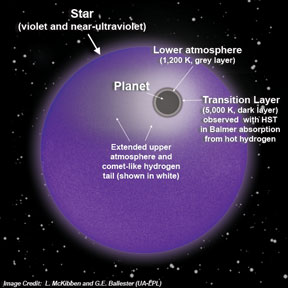 We’re talking serious heat in the atmospheric layers under study. Says research team leader Gilda Ballester (University of Arizona): “The layer we studied is actually a transition zone where the temperature skyrockets from about 1,340 degrees Fahrenheit (1,000 Kelvin) to about 25,540 degrees (15,000 Kelvin), which is hotter than the Sun. With this detection we see the details of how a planet loses its atmosphere.”

Image: The planet HD 209458b as envisioned in transit around its parent star. Note the ‘cometary’ tail of hot hydrogen, shown in white. Credit: L. McKibben and G.E. Ballester (UA-LPL).

But don’t expect the planet to evaporate any time soon. Its life expectancy is about five billion years. 150 light-years from Earth in the constellation Pegasus, HD 209458b was the first exoplanet discovered to transit its star as seen from Earth, and it’s that transit that makes atmospheric studies possible. They show the basic chemical makeup there to be oxygen, carbon, sodium and that upper layer of hydrogen that is hot enough to escape into space. Two separate investigations have put these facts together, with Ballester’s team doing the recent analysis of the hot upper atmosphere and its striking dynamics.

And note the distinction between this work and direct imaging. To make their observations, Ballester’s team studied spectra of the star when the planet was in transit and when it was not. A comparison of the data yielded the planetary spectrum. The method is ingenious and workable but relies on transits to function — the planet itself is never visible. One day, we’ll be able to take direct spectroscopic measurements for non-transiting planets that may tell us about distant atmospheres, and even life. My guess is that a starshade will be the operating technology.