Debris Disk Around a Dead Star

Our Solar System in the distant future may look something like the Helix nebula today. That’s because in about five billion years, the Sun will have become a white dwarf, its inner planets swallowed up by its earlier expansion, its outer planets, asteroids and comets surviving in distant orbits and colliding with each other to form a ring of dusty debris. The Sun will undergo, in other words, a kind of rejuvenation, experiencing what scientists call ‘late bombardment’ in a system that has become dynamically young again.

Such a disk has now been found in the Helix nebula, some 700 light years away in Aquarius. It took the infrared tools of the Spitzer Space Telescope to sort out the glow of the dusty disk that circles the remnant white dwarf between 35 and 150 AU out. The assumption is that the disk is the result of smashups in the outer system, presumably involving objects like those in our Kuiper Belt or comets from an Oort-like cloud. 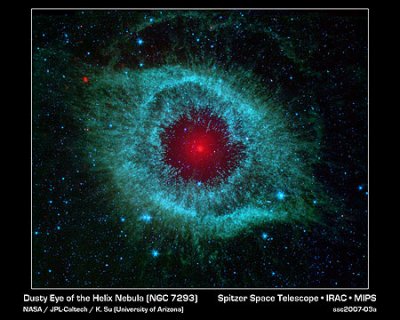 Image: Spitzer’s infrared view of the Helix nebula. Infrared light from the outer gaseous layers is represented in blues and greens. The white dwarf is visible as a tiny white dot in the center of the picture. The red color in the middle of the eye denotes the final layers of gas blown out when the star died. The brighter red circle in the very center is the glow of a dusty disk circling the white dwarf (the disk itself is too small to be resolved). Credit: NASA/JPL-Caltech/K. Su (Univ. of Arizona).

A dusty disk found last year around the white dwarf G29-38 had shown that objects like these could survive around dead stars, though the disk around G29-38 was much closer to its star. We obviously have much to learn about debris disks in such settings. And what exactly does happen when a Sol-like star becomes a red giant? Here’s a snippet from the paper on this work (references edited out; see the preprint):

It has been established that any planet closer than ~1 AU will be engulfed by an expanding red giant…, while planets outside ~5 AU from the Sun will survive post-main-sequence evolution…, and the orbits of surviving planets and most of the Kuiper Belt objects (KBOs) and Oort Cloud comets will expand adiabatically and remain bound to the solar system… The re-stabilized KBOs and Oort Cloud can later become the source of objects that go into the inner part of the system, either plunging into the white dwarf or breaking up due to tidal destruction, and they can populate the inner system with dust.

The newfound debris disk may be solving a different mystery as well. The Helix nebula’s white dwarf is known to be emitting highly energetic x-rays, leading some astronomers to believe it was accreting matter from a hidden companion star. But disk material falling onto the star and triggering the outbursts seems to be a more satisfactory answer. “The high-energy X-rays were an unsolved mystery, said You-Hua Chu (UIUC). “Now, we might have found an answer in the infrared.”

The paper on this work is Su et al., “A Debris Disk around the Central Star of the Helix Nebula?,” which will appear in Astrophysical Journal Letters. The preprint is already available online.