A Deep Sky Survey for Exoplanets

Stellar clusters make useful tools in the exoplanet hunt. Think of the transit search of the globular cluster 47 Tucanae, which has brought in statistically significant findings about the occurrence of hot Jupiters. As recently discussed in these pages, David Weldrake’s team found no transits in either 47 Tucanae or Omega Centauri, an indication that massive planets in short-period orbits are unlikely to form around older, metal-poor stars. We’ve already reviewed Weldrake’s work, but let’s turn to the general method of studying stars in clusters and its benefits.

For clusters give astronomers the chance to examine groupings of stars that are similar in their properties, making it possible to draw conclusions about how planets form in the presence of certain stellar parameters. That similarity also makes the work of separating true transits from false positives somewhat easier. Even so, no confirmed exoplanet has yet been identified in either a globular or open cluster. [My mistake! Epsilon Tauri b, as a reader just pointed out, is in the Hyades cluster, and more about that interesting world next week]. Unlike globular clusters on the order of 47 Tucanae, open clusters are much more loosely bound gravitationally, and are in most cases relatively young.

Both types of cluster are under active investigation. A team led by Scott Gaudi (Ohio State) and Matt Holman (Harvard-Smithsonian Center for Astrophysics) using the Multiple-Mirror Telescope in Arizona is studying the open cluster M37. Its recent report comments on the difficulties of open cluster work:

So far the open cluster surveys have only provided upper limits on the planet frequency, all of which lie above the frequency inferred from the other surveys. The fundamental problem facing an open cluster survey is that very few rich open clusters exist. Moreover, the richest clusters, which have at most a few thousand members, all lie more than a kilo-parsec away. Surveys of open clusters are necessarily deep surveys for which the expected number of planet discoveries is low (typically one or two planets). 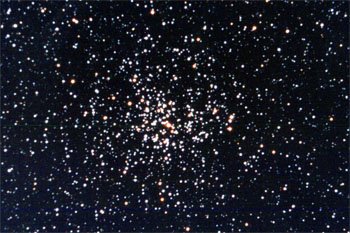 But the thinking is that planets down to Neptune-size may be detectable here. Given that we are now finding planets of this mass and even lower by radial velocity methods, the ability to generalize about their formation through a broad-based cluster study is helpful. And because the properties of these stars are well characterized, a transit would make it possible to pin down the mass and radius of the planet with great precision.

Image: The open cluster M37. Transit surveys of clusters like these help us understand the link between planet formation and the properties of the stars they orbit. Credit: G. Puglia & C. Zannelli (ORSA, Palermo).

Twenty-four nights of observations went into this run, compiling a total of 4500 images. The details of the image-gathering using the Megacam wide-ﬁeld mosaic CCD camera on the MMT are found in the team’s paper. The preliminary results:

While we have marginal detection capability for planets as small as Neptune, transiting planets smaller than Saturn should be easily detected if they exist. Using the above pipeline we have identiﬁed a number of candidate transiting planets; spectroscopic follow-up of these systems to rule out false positive scenarios is underway.

So we’re going to be learning a lot about planet formation in the smaller size ranges as this work unfolds. Remember that these are far younger stars than those considered in Weldrake and team’s work. Among the stars within observing range of the MMT, M37 stood out for Gaudi and Holman because its stars show Sun-like metallicity, and because at 520 million years, it is in the intermediate age range for this type of cluster.

The Weldrake and Gaudi/Holman surveys are telling us interesting but different things. Weldrake’s team targeted hot Jupiters in globular clusters whose stars are ancient, with an eye to the effects of metals on planet formation. Gaudi and Holman are looking at considerably younger stars in a much more metal-rich environment, and — using a larger telescope than has been used for cluster surveys in the past — may be able to identify transits of smaller planets. It will be interesting to see how the metallicity question looks when these and other open cluster results are in, but one would suspect that younger stars will yield their share of planets, as the Hyades cluster has begun to do.