Perhaps ten to twenty kilometers under Europa’s global shell of ice there looks to be an ocean. That ice sheet is pretty thick for even our best drilling rigs but, says William B. McKinnon (Washington University, St. Louis), the deformities make a good case for its being relatively thin in comparison to the world it encircles. The smooth and largely uncratered surface implies that the ice has been active in recent geological time.

McKinnon made the case for a Europa mission at the American Geophysical Union meeting last December and continues to advocate close study of the Jovian moon, which seems to offer one of the most intriguing habitats for life’s development in our Solar System. The Galileo mission, due to its serious antenna problems, couldn’t get enough images to see active geysering, as we’ve found on Saturn’s moon Enceladus, but we do see what McKinnon calls “…lots of interesting ice tectonics, and surface eruptions with weird colors and spectral signatures whose compositional implications everyone just loves to argue about.”

All of which makes the case for a mission that can do close up work:

“To go into orbit around Europa with high-resolution cameras, spectral imagers and sophisticated, ice-penetrating radars of the sort mapping Mars right now, would allow us to really characterize that ocean and give us clues about the biogenic potential of the surface materials. We’d see to the bottom of the ice shell, I predict. It would be a fantastic proof of concept.”

Is a Europa mission feasible? Of course. Cassini has demonstrated what’s possible in such challenging environments. But NASA’s budgeteers are going to have trouble landing the $2 billion such a mission would cost, and there are the competing possibilities of Titan and Enceladus, not to mention the Moon program. But Ronald Greeley (Arizona State) couldn’t agree with McKinnon more on the importance of such a mission, and spoke about it yesterday at the American Association for the Advancement of Science meeting in San Francisco.

Greeley targets Europa’s potential for life, noting that the moon holds more water than all the oceans of Earth. If we can find the right energy source, perhaps through gravitational and magnetic interactions with Jupiter, we have a case for interesting things happening under that ice.

Another Europa plus: the presence of organic minerals mixing with the moon’s surface ice. “Ultimately,” says Greeley, “we want to get down through that ice shell and into the ocean where any action is. So it matters whether the ice is 10 yards thick, or 10 miles or more. The data we have today will never answer that question.” 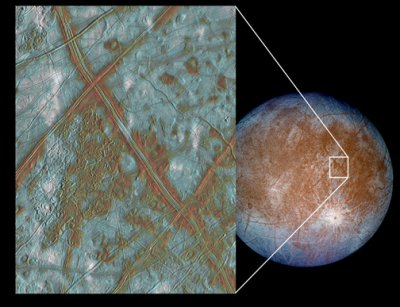 Image: The image on the left shows a region of Europa’s crust made up of blocks which are thought to have broken apart and “rafted” into new positions. In this false color image, reddish-brown areas represent non-ice material resulting from geologic activity. White areas are rays of material ejected during the formation of the 25-km diameter impact crater Pwyll (see global view). Icy plains are shown in blue tones to distinguish possibly coarse-grained ice (dark blue) from fine-grained ice (light blue). Credit: NASA.

To test the thickness of Europa’s ice, Greeley advocates a study of the shell’s tidal flexing as the moon orbits Jupiter. A thick ice layer, one that goes all the way down to the ocean floor, would produce small tidal flexing, but a thinner shell should demonstrate much more effect. A spacecraft flying a high-precision altimeter could make such a measurement.

And here’s an interesting twist. Putting the spacecraft into orbit around Ganymede rather than Europa might be the best solution, the radiation environment at Europa itself being quite harsh. Greeley believes the Europan tidal effect could be measured from Ganymede orbit and offer a mission design that doesn’t produce radiation damage to sensitive electronics within a few months (not to mention the interesting possibilities around Ganymede). All of which points to more and more workable Europa concepts while leaving the big one unanswered. Given NASA’s budgetary woes, how do we fund the Europa gambit?