Most speculation about finding life on Europa revolves around drilling through the perhaps kilometers-deep ice to sample the ocean beneath. But paleobiologist Jere H. Lipps (University of California, Berkeley) envisions a different exercise. Lipps, who has studied polar environments for twelve years in Antarctica, notes that turnover of ice on that continent often brings organisms to the surface that would otherwise be hidden.

Is ice shifting similarly on Europa? Absolutely. Looking at images of that fractured surface, we see a dynamic environment where water from beneath seems to have welled up and re-frozen. The surface is strewn with domes, ridges and tilted ice rafts. Evidence of life might be found in places where blocks of ice have pushed up to form ridges and rills.

Lipps puts it this way:

“This is a paleontological search strategy, which is what I do. If I want to collect fossils in Nevada, I get a map and look for likely spots, like rock outcroppings, where fossils will be found. Ice turned on its edge is just a geologic outcrop to me let’s go there and see if we can find evidence of past or present life.” 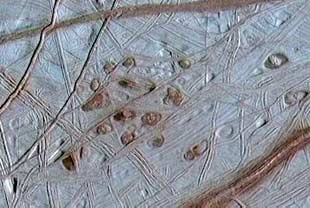 What about radiation in the hostile Jovian environment? Lipps believes it is unlikely to penetrate more than one or two meters. That would leave even near-surface ice environments — cracks, overhangs, and so on — that could support life forms. And just as the paleontologist in New Mexico can see an evolutionary history of life over time by studying layers of sedimentary rock, ices of different ages could provide the same perspective to a rover or — let’s hope one day — a human on Europa.

Image: The reddish ovals in the center of this image may be areas where water from Europa’s underground ocean upwelled and froze on the surface. Credit: Galileo Project, NASA.

Lipps spoke on a panel at the American Association for the Advancement of Science meeting that included William McKinnon (Washington University), whose advocacy of a Europa mission we discussed not long ago in the first part of this post. A central point about the search for life on Europa is not to get too doctrinaire about just how and where we may find it, for Earth’s poles show life’s unique adaptability. Lipps again:

“Based on analogy with Earth’s polar seas, Europan life may occur in many habitats: on soft and rocky bottoms at the ocean’s floor, associated with hydrothermal vents on the floor of the oceans, at different levels in the water column as plankton and nekton, and in and on the ice cover itself. Some of these might contain complex associations of life forms, including both micro- and macroscopic forms and consumers and predators.”

Lipps and Sarah Rieboldt proposed likely habitats for Europan life in “Habitats and taphonomy of life on Europa,” Icarus 177 (2005), pp. 515-527. Taphonomy refers to the processes that occur during fossilization, a necessary study if paleontologists are to extract accurate information about the organisms involved. Some day let’s hope we have boots on the ground on Europa to pursue these investigations, but a sampling strategy could be created earlier for properly equipped rovers.