Centauri Dreams usually confines itself to the outer planets and beyond, but this photo of Mars taken by the Rosetta spacecraft’s Philae lander is just too unusual to pass up. You can see one of Rosetta’s solar arrays in the foreground, with the Syrtis region on the Martian surface some 1000 kilometers below. The lander is scheduled for a 2014 touchdown on comet 67P Churyumov-Gerasimenko. Numerous system checks are ahead as Rosetta prepares for a near-Earth swingby in November of this year. 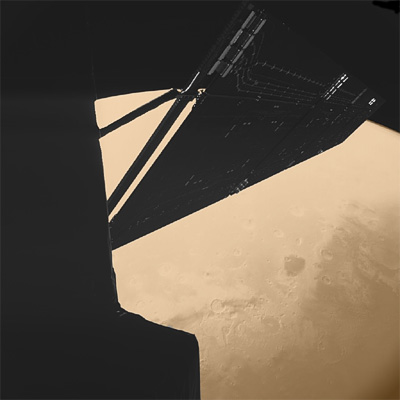 Next post: A Jovian Outpost: The Fifty Year Plan