New Horizons’ close approach to Jupiter on the 28th of February set up some intriguing observational possibilities. The Pluto-bound spacecraft now moves beyond the giant planet in a trajectory that takes it down Jupiter’s ‘magnetic tail,’ where sulfur and oxygen particles from its magnetosphere eventually dissipate. Since no spacecraft has ever been in this region before, coordinating what New Horizons sees with other instruments — both space-based and terrestrial — can tell us much about the Jovian environment.

The image below is a composite of data from the Chandra X-ray Observatory superimposed upon the latest Hubble image. Notice the x-ray activity near the poles, where Chandra is detecting aurorae. The operative mechanism seems to be interaction between the solar wind and the sulfur and oxygen ions in Jupiter’s magnetic field, creating aurorae a thousand times more energetic than what we see on Earth. 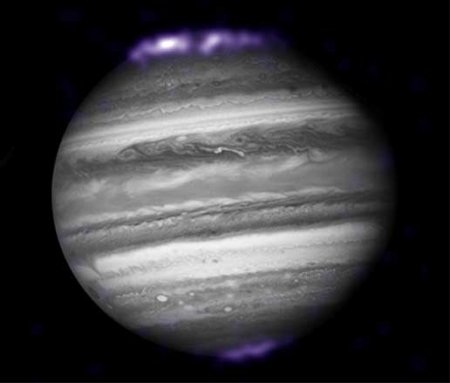 Image: In preparation for New Horizon’s approach of Jupiter, Chandra took 5-hour exposures of Jupiter on February 8, 10, and 24th. In this new composite image, data from those separate Chandra’s observations were combined, and then superimposed on the latest image of Jupiter from the Hubble Space Telescope. Credit: X-ray: NASA/CXC/SwRI/R.Gladstone et al.; Optical: NASA/ESA/Hubble Heritage (AURA/STScI).

To get a better picture of what’s going on, astronomers will tap observations by the Far Ultraviolet Spectroscopic Explorer (FUSE) satellite along with optical information from ground-based telescopes. How do the auroral emissions relate to what New Horizons will find as it moves down the magnetic tail? There will be no shortage of data as we marshall a wide range of resources to triangulate an answer. For New Horizons, Jupiter turns out to be much more than a simple gravity assist.