Whither the Science Fiction Magazines?

Back in the 1950’s, science fiction magazines were all over the newsstands. That’s significant for Centauri Dreams‘ purposes because these titles spurred many a career in science and a fascination with astronomy, astrophysics and engineering. Many is the scientist I’ve talked to who fondly reminisces about stories that proved inspirational, and in today’s math-challenged world, getting students to start thinking about pursuing work in physics or other sciences is a serious concern. 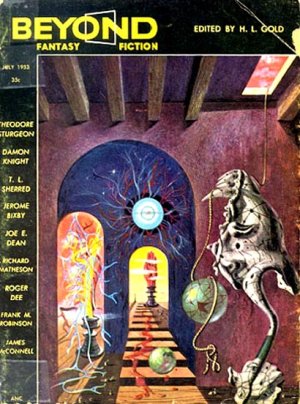 Which is one reason Paul Raven’s recent essay on the declining fortunes of the science fiction magazines caught my eye. Paul writes Velcro City Tourist Board, the site I turn to when I want to know what’s worth reading on the modern SF scene. He’s well plugged in — Paul writes reviews for Interzone, the fine British magazine, among other things — and for those of us whose SF tastes run to older material, he provides a wonderful way of keeping up with new trends and making sense out of where the field is going.

Image: The first issue of Beyond Fantasy Fiction, from July of 1953. Note the distinctive cover art by Richard Powers. The 1950’s produced many solid titles that have long since vanished. What can we do to recapture that era’s publishing vitality?

Jump back to that 1950’s newsstand a moment. I can remember seeing, at just one drugstore in suburban St. Louis, a wide range of titles: Galaxy, Infinity, Worlds of IF, Astounding, Venture, Amazing, Fantastic Stories, Fantasy & Science Fiction, Fantastic Universe and Satellite. Others were available around town, some of them only briefly (I recall Damon’s Knight’s Worlds Beyond, for example). And a magazine called Beyond, the fantasy offshoot of Galaxy, is a wonderful memory, its exotic covers capturing fascinating and always well-written tales of the unknown.

Compared to that scene, today’s magazine drought is a sad thing indeed. And even among the survivors, which in the US include Analog (the old Astounding), F&SF and Asimov’s, subscriber numbers are nowhere near what they might be, while the brave attempt to translate short fiction markets to the Web still tries to define itself. I suspect good things will eventually come from that attempt (check Strange Horizons), but until then, I worry like Paul Raven about the effect of genre magazine loss:

The magazine markets have always been the proving ground for new novelists in genre, and that’s the best argument for wanting to them to survive that I can think of. Novels will take much longer to die off in dead tree format for an assortment of reasons – the iconic status of the book, the inconvenience and user cost of printing out a novel length manuscript, and so on – although the big publishers are starting to realise that digital is as unavoidable as death and taxes if they want to stay relevant in a wired world. But magazines of all types are already suffering, because there are so many more efficient ways to get hold of bite-sized content.

Internet content is indeed changing the equation. Is it both the cause of the problem and its solution? The major US magazines are available in digital form through venues like Fictionwise, and as one who does a lot of reading on a Palm TX, I see this as an exploitable market. The key will be figuring out how to turn the necessary profit to support an ongoing venture — writers do like to be paid, and so do editors and publishers. 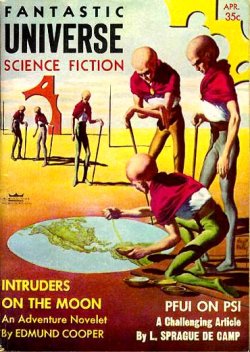 As the experimentation proceeds, one good thing will be a larger marketplace for writers. The current magazines are largely filled with the same names month after month. The lively market of years past has become a much diminished club of insiders with few membership slots open. Paul believes that free content supported by advertising will reinvigorate the magazine scene and provide new opportunities. Perhaps, but I have my doubts in a world that seems to be turning away from text entirely thanks to the enticement of video in all its venues.

Image: The April 1957 issue of Fantastic Universe. Covers like these prompted endless speculation in this young reader about possible futures and our place in the cosmos.

Even as I write that, though, I’m reminded that one thing I’ve always missed when reading magazines in digital format is not just the illustrations but the advertising itself. I like to look at the cover art of new books, for example, and I miss the print formatting of the paper magazine. The online solution will gradually have to work out file formats (and I am not talking about PDF!) that incorporate as much of the visual appeal of a printed volume as possible, while including the digital benefits that are so obvious, such as the search function. And needless to say, doing this without over-burdening the result with DRM (digital rights management) would allow portability between devices.

The key question persists. As SF magazines make the online transition, will they be able to generate readers in sufficient numbers?

I have no answer to that one, but do believe that a viable science fiction scene is a stimulus to the scientific imagination, and one that acts as a powerful recruiter for many of the sciences. Genre magazines seem like a niche, but their effects have always been greater than their numbers suggest. It’s good to see editors like F&SF‘s Gordon van Gelder engaging on this issue (see the comments to Paul’s post), and searching for the model that will take us forward. Let’s hope such editors succeed.