What is it about Enceladus? I doubt anyone would have thought the tiny moon would weigh so heavily in our thinking about Saturn before Cassini, but now comes the news that Enceladus is distorting the planet’s magnetic field to the point that it becomes tricky to measure the length of the Saturnian day. Count the electrically charged particles originating in the moon’s geysers as the culprit — they’re actually causing Saturn’s magnetic field lines to slip relative to the planet’s rotation. 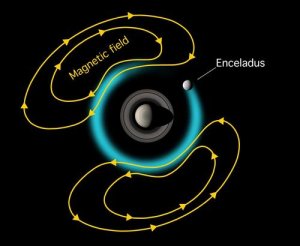 The process seems to work like this: Gas particles are ejected from the geysers on Enceladus and become electrically charged. Captured by Saturn’s magnetic field, they form a disk of plasma that wraps around the planet’s equator. The rotation of the plasma disk slows down enough due to interactions with the magnetic field that the rotation period Cassini has been measuring — based on radio emissions — is not actually the length of Saturn’s day. Instead, it’s the rate of rotation of the plasma disk.

Image: Geysers on Saturn’s little moon Enceladus are throwing off Saturn’s internal clock, making it hard to measure the length of the Saturn day. Credit: NASA/JPL.

Figuring out how long it takes a gas giant to rotate is problematic, but using regular radio signals seemed to work for Jupiter, Uranus and Neptune. Saturn’s radio period creates a problem because it acts like a pulsed signal instead of a rotating beam. Here’s a possible reason for the pulse, as explained by David Southwood (Imperial College, London):

“We have linked the pulsing radio signal to a rotating magnetic signal. Once each rotation of Saturn’s magnetic field, an asymmetry in the field triggers a burst of radio waves. We have then linked both signals to material that has come from Enceladus.”

Moreover, Saturn’s radio period seems to be changing over time, a difference of one percent between Voyager’s passage in the 1980’s and Cassini’s current measurements. Were the geysers of Enceladus more active when Voyager passed Saturn, or are we simply looking at seasonal variations as the planet orbits the Sun? Whatever the case, we now learn that an accepted marker — involving radio, magnetic field and planetary rotation — has to be reevaluated, and once again Enceladus finds itself in the thick of the controversy.

The paper is Gurnett et al., “The Variable Rotation Period of the Inner Region of Saturn’s Plasma Disk,” published online by Science (March 22, 2007), with abstract here.