Shrouded in the night of a 15-year winter, Saturn’s north pole demands specialized instruments to yield its secrets. Enter Cassini’s visual and infrared mapping spectrometer, whose data on the region have disappointed no one. A six-sided honeycomb-shaped feature has emerged that was first found by the Voyager 1 and 2 spacecraft over twenty years ago. Now Cassini has, for the first time, captured the entire hexagon in a single image.

What exactly is it? Think of Earth’s polar regions, where winds move in a circular pattern around the pole, but ponder this difference: Saturn’s vortex is a hexagon nearly 25,000 kilometers across. Four Earths would fit inside it. Click here for a QuickTime movie of the odd feature. 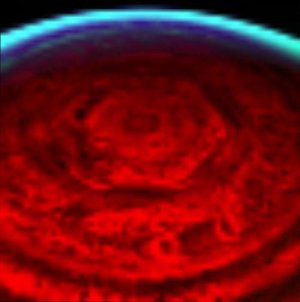 This makes Saturn possibly the Solar System’s most intriguing object when it comes to polar anomalies. The south pole sports an enormous hurricane, while the north is dominated by clouds moving along the hexagon at great rate. Indications are that the hexagon extends fully 100 kilometers below the cloud tops, leaving us with yet another outer system surprise.

Image: In the new infrared images, the strong brightness of the hexagon feature indicates that it is primarily a clearing in the clouds, which extends deep into the atmosphere, at least some 75 kilometers (47 miles) underneath the typical upper hazes and clouds seen in the daytime imagery by Voyager. Thick clouds border both sides of the narrow feature, as indicated by the adjacent dark lanes paralleling the bright hexagon. This and other images acquired over a 12-day period between Oct. 30 and Nov. 11, 2006, show that the feature is nearly stationary, and likely is an unusually strong pole-encircling planetary wave that extends deep into the atmosphere. Credit: NASA/JPL/University of Arizona.

Cassini team member Kevin Baines (JPL), who works on the spacecraft’s visual and infrared mapping spectrometer, has this to day:

“This is a very strange feature, lying in a precise geometric fashion with six nearly equally straight sides. We’ve never seen anything like this on any other planet. Indeed, Saturn’s thick atmosphere where circularly-shaped waves and convective cells dominate is perhaps the last place you’d expect to see such a six-sided geometric figure, yet there it is.”

It’s clear by comparing the results of Cassini’s infrared mapping with what the Voyagers found that the hexagon has remained fixed with Saturn’s rotation rate and axis for the last 26 years. The waning northern hemisphere winter may bring the feature into visual camera range within about two years, helping us get a better read on the rotation rate of Saturn’s deep atmosphere. Whether that will unlock further clues as to the actual rotation rate of the planet remains to be seen.

Next post: Red Dwarf Planets: Too Dry for Life?