A Note on the Enzmann Starship 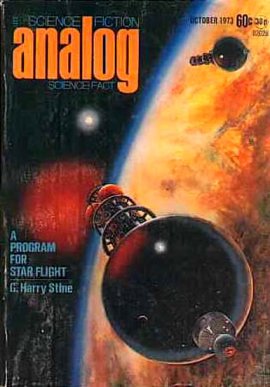 The always reliable Adam Crowl takes on fueling requirements for starship projects like Daedalus, with an interesting look at alternatives for mining He3. The Daedalus team, members of the British Interplanetary Society who created the first in-depth study of a starship, had hoped to tap Jupiter’s atmosphere for the job, but Crowl examines Saturn, Uranus and Neptune as well, finding Saturn the best fit.

Adam then tackles a fascinating article by G. Harry Stine (thereby launching me on a search for the back issue of the magazine in question, now almost irretrievably hidden in the recesses of my office). Here’s how he describes it in Crowlspace:

I have just received an issue of the October 1973 Analog – the one with a gorgeous Rick Sternbach cover of two Enzmann starships and the cover article by G. Harry Stine, “A Program for Star Flight”. It’s quite a memorable article as Stine was arguing for a star flight program to begin c.1990, and the development of a massive in-space industrial base to support the effort. His initial phase would study the nearby stars with Lunar interferometers, then launch million-ton space-probes at 0.9c, and finally launch ten-ship fleets of Enzmann starships (roughly 12,000,000 tons each, mostly deuterium fuel.) Quite a major effort, but he optimistically costs it at $100 billion (in 1973$.)

Read the whole post to get Adam’s thoughts on what’s wrong — and right — about the Stine concept. 0.9c from an Orion-style pulse drive is just one of the improbabilities (0.08-0.15 c looks more feasible, though even that seems to be a stretch). We’ll dig into Stine’s ideas here in the future and see how they and the Enzmann starship have stood up, and whether we agree with Adam that “…the basic idea of attaching starships to huge masses of propellant, rather than big tanks, is a good one.”