A Finnish team has introduced a new wrinkle on the solar sail idea. Or more specifically, on the general principles of the magnetic sail, which would tap the propulsive power of the solar wind to push a ‘sail’ created as a field around the spacecraft itself. The so-called ‘electric sail’ would use fifty to one hundred 20-kilometer long charged tethers, their voltage maintained by a solar-powered electron gun aboard the vehicle. We’re talking about tethers made of wires that are thinner than a human hair, thin enough that each can be wound into a small reel.

But unwind the tethers and you get interesting results. The electric field of each wire now extends tens of meters into the solar wind flow. A single tether yields the equivalent effective area of a sail roughly a square kilometer in size. You can see the promise of deploying multiple tethers to reach high velocities. What’s more, this sail allows the spacecraft to ‘tack’ towards the Sun as well as sailing outward from it. 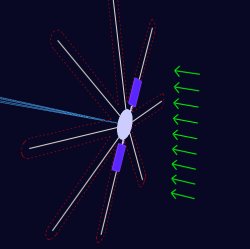 All told, the electric sail points toward faster transport within the Solar System. The team, whose work was published in late March, has been running supercomputer simulations to verify the concept. Their numbers are encouraging: taking an average figure for the solar wind (which can range from 300 to 800 km/s), their sail can generate speeds up to 100 km/s, which would get a probe to Pluto in less than four years and into the nearby interstellar medium in fifteen.

Image: In this phase the wires have been deployed and the electron gun has been started. The blue lines symbolise the electron beam of the gun. The spinup propulsion arms and associated fuel tank have been jettisoned to save mass. The solar wind acts on the wires, bending them slightly. The electric field around the wires is depicted by a dashed red line. Credit: P. Janhunen/Kumpula Space Centre.

Although we lose the solar wind as we move beyond the outer planets, the Finnish design does have interstellar implications, at least by extension. From the paper:

In interstellar space the plasma ﬂow is rather slow. Thus the electric sail cannot be used for acceleration, but it can instead be used for braking the spacecraft. There are some concepts such as the laser or microwave sail which are designed to “shoot” a small probe at ultrahigh speed towards e.g. a remote solar system. In these concepts the power source is at Earth so that the accelerated probe needs no propulsive energy source. Stopping the probe at the remote target is very difﬁcult, however, if one has to rely on power beamed from the starting point. The electric sail might then provide a feasible stopping mechanism for such mission concepts. In other words, one would shoot a probe to another solar system at ultrahigh speed using a massive and powerful laser or microwave source installed in near-Earth space, brake the probe before the target by the electric sail action in the interstellar plasma and ﬁnally explore the extrasolar planetary system with the help of the electric sail and the stellar wind. A similar idea was proposed by Zubrin and Andrews (1990) for their magnetic version of the solar wind sail.

Note the difference between the electric sail (and magsail concepts like Robert Winglee’s M2P2) and the standard solar sail. For one thing, the electric sail relies on a stream of charged particles (the solar wind) to push it, while a solar sail taps the momentum of solar photons. For another, a solar sail is a physical structure that faces problems of deployment that only get magnified as you go to larger and larger sail designs. An electric sail’s deployment problem comes down primarily to tether extension, a much less demanding proposition. And that puts sails front and center as we look to ramp up travel times to the outer planets.

The paper, available for download, is Janhunen et al., “Simulation study of solar wind push on a charged wire: basis of solar wind electric sail propulsion,” Annales Geophysicae 25 (March 29, 2007), pp. 755–767. And here’s a backgrounder, including an interesting animation, from the Kumpula Space Centre in Helsinki.