Want to take a guess at what NASA’s longest running continuous research program in physics is? The answer: Gravity Probe-B. Although the satellite wasn’t launched until 2004, its origins go back to 1959, with NASA funding beginning in 1964. GP-B is a laboratory in space, one that uses four precision gyroscopes to measure two effects that grow out of Einstein’s general theory of relativity. The geodetic effect is caused by the mass of the Earth warping local space-time. The frame-dragging effect results from the rotating Earth dragging local space-time along with it. 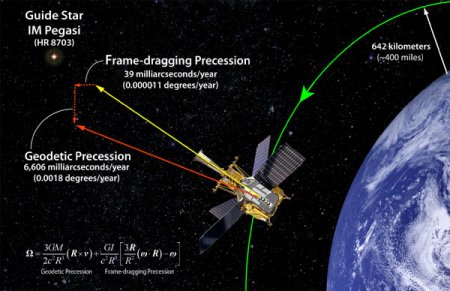 Image: With its telescope aimed at IM Pegasi, a far-off guide star serving as a fixed reference point, the experiment measured tiny changes in the direction of spin of four gyroscopes. Credit: Stanford University.

And if these things seem far too minute to examine, we’re beginning to learn that GP-B is up to the challenge, at least as far as the geodetic effect is concerned. The first look at data from the experiment was released at the American Physical Society meeting in Jacksonville (FL) on April 14. GP-B’s gyroscopes should shift by a tiny amount due to the geodetic effect during the course of a year, departing from their initial alignment by 6.606 arc-seconds (0.0018 degrees).

So far that shift is confirmed to a precision of better than one percent. “It’s fascinating,” says Francis Everitt (Stanford), principal investigator of Gravity Probe B, “to be able to watch the Einstein warping of space-time directly in the tilting of these GP-B gyroscopes — more than a million times better than the best inertial navigation gyroscopes.”

Fascinating indeed. Centauri Dreams might have chosen the term ‘awe-inspiring’ — imagine noting an effect this small and using it to confirm insights that grew out of raw theory and the genius of a single man. The mind reels in admiration at both theorist and experiment.

The frame-dragging effect is still in play. Theory says it should cause the spin axis to shift by an angle of 0.039 arc-seconds (0.000011 degrees). That’s 170 times smaller than the geodetic effect and the Stanford team is still trying to extract its signature from the available data. Torque and sensor effects have to be modeled and removed from the result.

But here’s a much more interesting way to put this ongoing work, spoken by GP-B program manager William Bencze:

“We anticipate that it will take about eight more months of detailed data analysis to realize the full accuracy of the instrument and to reduce the measurement uncertainty from the 0.1 to 0.05 arc-seconds per year that we’ve achieved to date down to the expected final accuracy of better than 0.005 arc-seconds per year. Understanding the details of this science data is a bit like an archeological dig. A scientist starts with a bulldozer, follows with a shovel, and then finally uses dental picks and toothbrushes to clear the dust away from the treasure. We are passing out the toothbrushes now.”

Those toothbrushes are going to be busy. For more on the problematic torque and sensor effects, this Stanford news release is helpful. As to the GP-B spacecraft itself, data collection ended in September of 2005 and the team has been working on the analysis of more than a terabyte of information ever since. To perform these extraordinary measurements, the spacecraft and gyroscope spin axes were aligned with IM Pegasi, used as a guide star throughout the mission. Expect the data analysis to be completed in December. Regarding the outcome, we may well have a hunch, but Francis Everitt offers a useful reminder: “Always be suspicious of the news you want to hear.”