It should come as no surprise that Eric Drexler has an interest in solar sails. Normally thought of for his contributions to nanotechnology, and especially his groundbreaking The Engines of Creation (Anchor, 1986), Drexler once discussed sail technologies in a short essay called “The Canvas of the Night.” Sails present an obvious problem — how do we stow such thin films for launch, then deploy them in space without damage. Wouldn’t these issues be best resolved by building the sails in space? Drexler had this to say about the idea:

Lightsails are what solar sails seem likely to become when we build them in space. They differ considerably from the deployable, plastic-film sails designed for launch by rocket from the ground. Not needing the toughness to survive folding, launch and deployment, lightsail reflectors need no plastic backing tens of thousands of atoms thick: they can be unbacked aluminum films just a few hundred atoms thick. Such thin foil cannot be made by smashing a bar of aluminum between rollers, as kitchen foil is made. Instead, thin films are made by piling up atoms on a smooth surface.

Drexler discusses how to do this using relatively conventional techniques (by nano-technological standards), but goes on to look at laser-driven mesh sails for interstellar missions. Now the tools of new technologies really come into play. “The molecular machines of nanotechnology,” he writes, “building atom by atom, could build such sails by the mile. (They will build much, much more than that, but that is a different story).”

All of this came to mind when reading advanced nanotechnology, where Brian Wang discusses a proposal by Devon Crowe of PSI Corporation (released as a presentation on a Phase I NIAC study from what is presumably that organization’s last meeting). Crowe proposes creating large space structures made out of bubbles or foams that can be made rigid by ultraviolet ‘curing.’ Coating the inside of such a bubble through evaporation could produce reflective sails of significant dimension.

Is this a method for making the kind of lightsail Robert Forward once analyzed as a way of getting payloads and human crews to nearby stars? Crowe envisions bubbles and foam with individual cell sizes up to 100 meters in low Earth orbit. But take the technology into deep space and you can create a single bubble 1000 kilometers wide, with foam structural elements that can be made much larger still. The presentation shows where this leads: “Structural spans could exceed 10,000 kilometers in micro-g environments.” 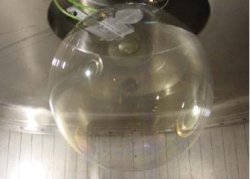 Those who have read Forward’s novel Rocheworld may remember the giant sail the crew used to get to Barnard’s Star, fully 300 kilometers wide. Forward envisioned a 3500 ton payload for that mission, including a habitat supporting twenty crewmembers. He had even worked out a way to stop the sail at destination by separating it upon arrival and letting the outer sail ring reflect Earth-beamed laser light back on the central sail, thus slowing the spacecraft over the course of a year’s time.

And how about the Fresnel lens he proposed using to focus the laser over interstellar distances? Made out of concentric rings of one-micron thick plastic film alternating with empty rings, the lens would achieve a diameter of 1000 kilometers. Placed between the orbit of Saturn and Uranus, it would focus the beam so tightly that it would not reach the size of its transmitting aperture until fully 44 light years from its source.

Can Crowe’s ideas be adapted to build such vast structures? If we can find ways to make such things happen through nanotechnological methods, then some of Forward’s seemingly outlandish ideas move into the realm of the plausible. And that’s a heartening thought, because Forward believed in his marrow that interstellar travel was difficult but not impossible, and that human beings would one day make the journey.

I notice that Webster Cash (University of Colorado at Boulder) is interested in seeing this research taken to the next level, though with NIAC gone, Phase II funding is obviously not forthcoming. But how these concepts might fit into the New Worlds Imager mission Cash is designing is an interesting speculation, and one that Crowe examines in his presentation. Major reductions in starshade mass and launch volume could well be attainable.