We’re at such an early stage in solar sail development that it will not be surprising if laboratory results lead us in entirely new directions. Consider James Benford’s work at the Jet Propulsion Laboratory, where he and brother Gregory experimented with an ultralight 7.5 g/m2 carbon sail to test out microwave beam concepts. If the Planetary Society’s Cosmos 1 sail mission had been successful, the Benfords would have been involved in a microwave experiment using the Deep Space Network’s Goldstone antenna, a beamed propulsion test that a failed booster precluded.

But the JPL work did lead to the interesting phenomenon of sublimation (also known as desorption). Put a microwave beam on the sail and you wind up with more acceleration than you expect. It’s the result of the evaporation of absorbed molecules from the hot side of the sail. In a 2005 paper in Acta Astronautica that we reviewed in these pages, the Benfords looked at putting desorption to work by painting a sail with a compound whose desorption properties are known and can give the sail an extra boost. A microwave beamed sail might be boosted out of low Earth orbit and, having expended its desorbed materials, spend the rest of an interplanetary journey operating as a normal solar sail. 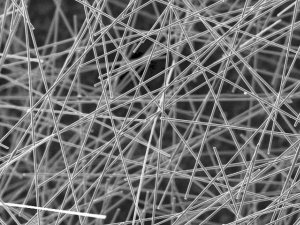 Giving the idea punch is the Benford’s estimate that a desorbing sail under microwave beam might make the journey to Mars in no more than a month. But doesn’t desorption produce damage to the sail material? That question has come up in earlier discussions here, and James Benford has been kind enough to answer it by sending along these photographs.

In the image above, you’re looking at the front of the sail material used in the Benford’s JPL experiment; the second image shows the back of the same sail. 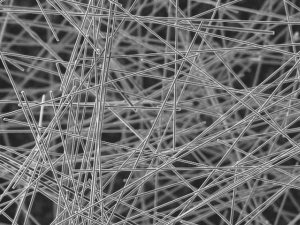 Let me just quote from the material Benford sent to describe what we’re looking at:

The experimental data don’t show sail damage from desorption. The molecules are not an integral part of the lattice, but embedded in it during its fabrication. If damage were to occur due to desorption, one would expect that the nodes where the excess heating occurs to have a changed appearance, such as singeing and blackening. No such signs are evident from the microphotography of the sails, however.

Image: Front (above) and back (below) for sail #1 post-flight. No local burning of the sail is evident. Nor is there mass loss from weighing. The sail accelerated at about 2 gees. Credit: James Benford.

The conclusion is that asymmetric (one-sided) sublimation pressure is a viable propulsion mechanism for microwave-driven sails. Based on thermal diffusion calculations, here is a clear case for a temperature gradient to support differential evaporation.

Note that laser/sail interactions are very different because the far larger frequency gives a skin depth ~1% of the sail thickness. This can support large temperature differences and large sublimation pressure effects; Leik Myrabo has observed them to onset at ~0.1 gee. Since skin depth scales as the square root of frequency and the laser work is four orders higher in frequency, his skin depth must be <1% of the sail thickness, so ablation will certainly occur. More generally, sublimation could be a severely limiting factor for lasers with sails.

That last comment is interesting. Looking at sublimation as a propulsion mechanism reveals it as a potential problem for laser sail concepts while an advantage in the microwave realm. Moreover, microwaves are not only less damaging to sail materials but more efficient in their ability to heat the sail. Add to this that lasers experience atmospheric distortion problems that microwaves do not. The conclusion: beaming to a sail in low Earth orbit from the ground is more feasible in the microwave realm. And that may one day make a fast sail to Mars a reality.

Next post: Black Holes May Stir the Cosmic Broth