This is a big one, and it happens several years earlier than I had expected. A planet of about five times Earth mass, one whose radius is only 1.5 times that of our own world. Moreover, a planet that’s smack in the middle of its star’s habitable zone, with a mean temperature estimated at between 0 and 40 degrees Celsius. The models in question say that this is a rocky world, and its temperatures tell us that oceans could exist there. The first detection of a planet where carbon-based life could conceivably exist makes this one a find for the history books. 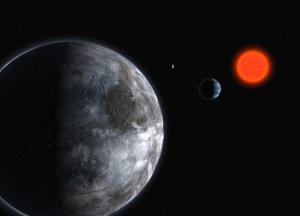 The star is Gliese 581, already known to be home to a planet of Neptune mass and a possible third world about eight times as massive as Earth. It’s an M-class red dwarf, far smaller and cooler than the Sun. The new planet, the smallest found up to this point, orbits it in 13 days. Gliese 581, it should be noted, is comparatively close to our own Solar System, about 20.5 light years away in the constellation Libra. Radial velocity methods seem to have been made to order for this small star and the planets that circle it.

Image: Artist’s impression of the planetary system around the red dwarf Gliese 581. Using the instrument HARPS on the ESO 3.6-m telescope, astronomers have uncovered 3 planets, all of relative low-mass: 5, 8 and 15 Earth masses. The five Earth-mass planet makes a full orbit around the star in 13 days, the other two in 5 and 84 days. (c) ESO.

Xavier Delfosse (Grenoble University), a member of the discovery team, has this to say about the significance of the new world:

“Liquid water is critical to life as we know it. Because of its temperature and relative proximity, this planet will most probably be a very important target of the future space missions dedicated to the search for extra-terrestrial life. On the treasure map of the Universe, one would be tempted to mark this planet with an X.”

Yes, and Gliese 581, with clear evidence of a second ‘super-Earth’ in an 84-day orbit (well outside the star’s habitable zone) and its Neptune-class world (5.4 day orbit) as well, is one of the most interesting planetary systems analyzed to date. We’ve looked many a time in these pages at what a terrestrial world around a red dwarf might be like on the surface. Surely tidally locked to its parent, with that dim red sun eternally fixed in the same place in the sky. Given a thick enough atmosphere, heat transfer could occur that keeps the dark side warm enough to prevent its gases from freezing out. We’re left with the possibility of a temperate region on the day side that could, for all we know, support life.

The new planet may not be anything like this, and it will take more work — and surely space-based instrumentation — to learn what its true characteristics are. But ponder a planet where infrared predominates rather than visible light, and periodic flare activity acts as an evolutionary stimulus. The consider the long lifetimes — more than a 100 times the Sun’s paltry ten billion years — that M-dwarfs have to let evolution work its wonders. There are arguments to be made for and against this scenario, but if it’s remotely true, then the number of habitable planets in our galaxy may be far higher than we’ve previously believed.

Physicist and science writer Douglas Blane recently interviewed astrobiologist Giovanna Tinetti on the subject of hunting for life-markers on exoplanets. Part of their discussion involved M-dwarfs, with Tinetti recalling a talk at Caltech by John Raven (Royal Observatory, Edinburgh), who described his work with Ray Wolstencroft on M-dwarf habitability. What kind of photosynthesis might happen on a world lit by the longer wavelengths of such a star? From the interview:

They provided a scheme for photosynthesis that uses three photons instead of two, as vegetation does on Earth. They showed that you can still have photosynthesis with a cooler star. So that started me thinking about what would happen to the red edge [photosynthesis shows high reflectance at the far red of the optical spectrum, a useful signal of the presence of vegetation]. I showed that it would be shifted, so you would need to look for a slightly different signature.

The next question of course was whether planets of such a star would have the same atmospheric characteristics as Earth. Now a scientist called Joshi had already provided a 3-D model for a terrestrial planet in the habitable zone of an M-star. He’d shown that you probably need more greenhouse gases to warm up the area not illuminated.

This is because for such a cool star the planet has to be very close. So it could be tidally locked, with one face always illuminated and the other always dark. That meant you needed a circulation of the atmosphere and a particular composition. We put that model together with my calculations on the shifted red edge, and discovered that the strength of the edge feature on an M-star terrestrial planet can exceed that on Earth, given the right conditions.

Of course, we can only speculate about the new Gliese 581 planet because thus far all we really have a read on is its orbital period, distance from the star and minimum mass. Even so, what a find, one that will surely spur yet more interest in the red dwarf category that accounts for up to 80 percent of the stars in our galaxy. Kudos to the discovery team and the amazing HARPS (High Accuracy Radial Velocity for Planetary Searcher) spectrograph, located on ESO’s 3.6-meter telescope at La Silla (Chile). HARPS detected velocity variations in this star between two to three meters per second — we’re talking about the speed of a brisk walk!

Planet hunter extraordinaire Michel Mayor (Geneva Observatory) has this to say about HARPS:

“HARPS is a unique planet hunting machine. Given the incredible precision of HARPS, we have focused our effort on low-mass planets. And we can say without doubt that HARPS has been very successful: out of the 13 known planets with a mass below 20 Earth masses, 11 were discovered with HARPS!”

All true, and you have to like where this is going. Mayor again:

“And we are confident that, given the results obtained so far, Earth-mass planets around red dwarfs are within reach.”

Oh for the dedicated (and lengthy) observing run sufficient to let HARPS do its number on Centauri B! And if you’re wondering about previous super-Earths, Gliese 876 does indeed have a planet with a minimum mass in this same range — 5.89 Earth masses — but its orbit (completed every two days) takes it too close to its star for liquid water to exist. Likewise, the icy world OGLE-05-390L weighs in at 5.7 Earth masses but is much more distant from its primary and out of the habitable zone.

The upcoming paper in Astronomy and Astrophysics is Udry et al., “The HARPS search for southern extra-solar planets : XI. An habitable super-Earth (5 MEarth) in a 3-planet system.” I’ll point you to the abstract as soon as it becomes available. Thanks to Darnell Clayton for additional information on this story.

Update: Here’s a link to the paper on this work; thanks to Malcolm Ramsay for the address.