The Royal Astronomical Society’s recent meeting was laden with interesting papers, enough so that, with the added distraction of Gliese 581 c, I find myself still clearing out the backlog of newsworthy items. Otherwise, Centauri Dreams would have examined Ruth Bamford’s work on radiation shielding much earlier. Bamford (Rutherford Appleton Laboratory) and team are working on a magnetic shield that would protect against dangerous cosmic rays and radiation. The work is significant because the radiation threat is real, and our current methods of dealing with it are inadequate for long-range space missions.

Consider the International Space Station, where a chamber built for the purpose of radiation protection is available. The method works for the intermittent periods when solar radiation is intense (as from major flares), but such a chamber adds substantially to the mass of a spacecraft, becoming impractical on missions beyond Earth orbit. The new plan is to create an artificial magnetosphere using superconductors and magnetic confinement techniques, a deflector shield that could be deployed not only on space vehicles but around bases on the Moon or beyond. 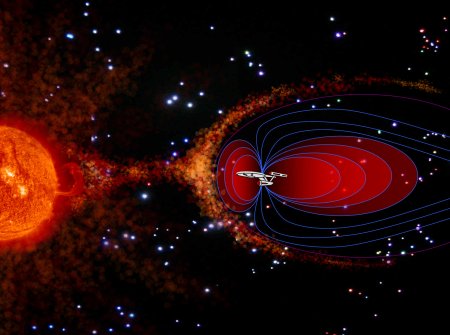 Image: An artificial magnetosphere could be generated around manned space craft en route to the Moon or Mars to protect the occupants from the potentially lethal radiation in space from the Sun. A superconducting ring on board such a space craft could produce a magnetic field, or mini-magnetosphere, similar to the Earth’s, which would create a Star Trek like ‘deflector or plasma shield.’ Credit: Ruth Bamford/Rutherford Appleton Laboratory.

Start thinking about the outer planets and radiation shielding becomes critical. Nor is it just a concern for the long journey there and back. We’d like to know a lot more about the major Jovian moons, for example, especially Europa because of its probable ocean beneath the ice. Callisto, too, shows some signs of possessing an ocean. But if a human presence is to be established anywhere near these worlds, it will have to reckon with Jupiter’s radiation belts. How radiation shielding plays out will have much to say about the kinds of missions we can mount near Jupiter.

Finally, we can speculate on how some of these technologies may eventually come together. We’ve talked about magnetic sail concepts in which a spacecraft generates a magnetic ‘bubble’ in order to ride the solar wind to the outer planets. More advanced designs might one day use beamed energy to reach speeds that could make an interstellar crossing possible within a human lifetime. Our prowess with artificial magnetospheres may have much to teach us not only about shielding but propulsion, which is why this work has implications not only within our own Solar System but for the longer missions that will follow.