The Search for Vulcan

40 Eridani is a triple-star system some 16 light years from Earth. If it rings a faint bell, that’s probably because of its association with Star Trek. In the universe of the show, 40 Eridani is home to Vulcan, birthplace of the inscrutable Mr. Spock (Gene Roddenberry himself signed off on the idea). Not so long ago, the existence of planets would have been doubted in such a system, but we’re learning that double and even triple star systems can and do support planets. So maybe there is a ‘Vulcan’ out there after all, though doubtless sans humanoids with pointy ears. 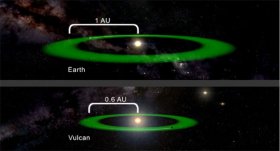 In any case, the elements of this system are widely spaced, and 40 Eridani A is a K-class star not so different from Centauri B, a star that could well support Earth-mass planets. Recently Angelle Tanner (Caltech) embarked on simulations designed to show whether or not the Space Interferometery Mission (known as SIM PlanetQuest) might be able to detect such a world. Tanner’s work confirmed that a planet like this in the habitable zone (about 0.6 AU) would be detectible. But it will have to wait for later missions, perhaps armed with sunshade or advanced coronagraph technology, to make the key spectroscopic measurements that would reveal the presence of biomarkers in its atmosphere.

The image above (click to enlarge) offers a comparison of the larger habitable zone around our Sun and that of 40 Eridani A (Credit: JPL). The Jet Propulsion Laboratory also offers a nifty animation of ‘Spock’s home’ here. Tanner’s work is slated for Publications of the Astronomical Society of the Pacific (and thanks to Hans Bausewein for the heads-up). The future of SIM PlanetQuest itself is more problematic. As of May 1, the word is “Launch deferred indefinitely by NASA headquarters.”