Plumes on Enceladus: A Tidal Squeeze

An object in an elliptical, egg-shaped orbit experiences interesting gravitational stresses. Enough so that the changing forces it endures may be the cause of the plumes of water vapor that Cassini found on Saturn’s moon Enceladus in 2005. In essence, the tiny moon is being alternately squeezed and stretched as it makes its way around the planet. These tidal forces cause existing fault lines to rub against each other, producing enough heat to turn ice into water vapor and ice crystals. 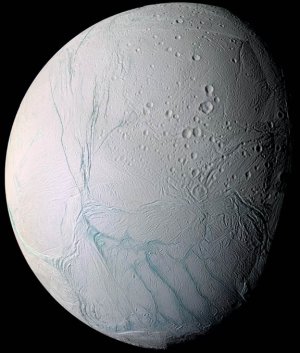 That’s the conclusion of new work by Francis Nimmo (University of California — Santa Cruz) and team, who note the warmer surface of Enceladus’ southern pole and the presence of the famous ‘tiger stripes,’ which appear to be tectonic fault lines. “We think the Tiger Stripes are the source of the plumes,” says Nimmo, “and we made predictions of where the Tiger Stripes should be hottest that can be tested by future measurements.”

Image: This is a mosaic of Enceladus compiled from 21 images taken by the Cassini spacecraft as it swooped past the moon’s south pole on July 14, 2005. The Tiger Stripe region appears as a series of long cracks toward the bottom. The mosaic is in false color, and includes images taken in various types of light, including ultraviolet and infrared. Credit: NASA/JPL/Space Science Institute.

The process at work is sublimation, which does not require water to go through a liquid state before becoming a vapor (as a guy who used to live in upstate New York, I’m reminded of the way snow can dissipate over time even when the temperature never gets above the freezing point — that’s sublimation). Interestingly enough, the study does suggest that Enceladus contains a liquid ocean deep beneath its ice, under a shell perhaps tens of kilometers thick. The theory almost demands an ocean to be there because otherwise tidal forces couldn’t generate enough movement in the faults to produce the needed heat.

A second paper in the same issue of Nature examines tidal forces and their effect on Enceladus, with this comment by lead author Terry Hurford (NASA GSFC), discussing his team’s computer model for calculating stress effects on the Tiger Stripes:

“We found that because of the way the Tiger Stripes are oriented on the surface, when Enceladus is farthest from Saturn, the stresses in the region pull most of them open, and when Enceladus is closest to Saturn, the stresses force most of them to close. Different stripes open at different times in the orbit. Assuming they erupt as soon as they open, exposing liquid water to the vacuum of space, we can predict which stripes will be erupting at certain times in the orbit. Also, because most of the stripes are open when Enceladus is farthest from Saturn, we expect the eruptive activity to be greatest at this time.”

The Nimmo paper is “Shear heating as the origin of the plumes and heat flux on Enceladus,” Nature 447 (17 May 2007), pp. 289-291; abstract here. The second paper is Hurford et al., “Eruptions arising from tidally controlled periodic openings of rifts on Enceladus,” in the same issue, pp. 292-294 (abstract) Future Cassini observations will be needed to get better imagery of the Tiger Stripes to differentiate the sources of the eruptions.