One of the most exciting aspects of the exoplanet hunt is that it is not confined to huge telescopes and professional astronomers. Timothy Ferris described the remarkable advances in amateur equipment and observing techniques in Seeing In the Dark (Simon & Schuster, 2002), but he’ll need a whole new chapter to cover what’s happening not only with distributed computing (as via the systemic collaboration, for example) and the software and hardware advances that let amateurs observe exoplanet transits from sites around the world. 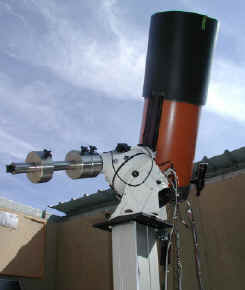 Last night Tonny Vanmunster observed the transiting ‘hot Neptune’ GJ 436 b from his CBA Belgium Observatory in Landen, reporting his results over the Net and this morning on his Web site. Ponder this: GJ 436 b orbits an M-class red dwarf that is 33 light years away. The planet itself has a mass roughly 23 times that of Earth, with a radius approximately that of Neptune. There was a time when Neptune itself would have been a tricky catch for the average amateur, but we’re entering the era of the amateur as exoplanet specialist. GJ 436 b is the sixth transiting exoplanet Vanmunster has bagged from his pastoral observatory.

Here’s the gist of his report. Check the site for the actual light curve for the transit, doubtless the first made by an amateur:

Rather unexpectedly, the skies cleared out on May 17/18, 2007 over CBA Belgium Observatory, shortly before the start of a transit of exoplanet GJ 436 b. Photometric conditions were not ideal (bit of haze), but I started a photometry session using a 0.35-m f/6.3 telescope and SBIG ST-7XME CCD camera with V filter. ..

Image: CBA Belgium Observatory is located in Flanders, Belgium. It is a remotely controlled observatory, that can be operated autonomously all night long. The only human interaction required is for opening and closing of the observatory, and initialisation of the telescopes, CCD cameras and computers. The building has a roll-off roof structure, and is measuring 3m by 4m. Credit: Tonny Vanmunster.

It could be argued, of course, that Vanmunster is not your average amateur. His observatory is the Belgian node for a network of amateur and professional astronomers known as the Center for Backyard Astrophysics, and his exoplanet observations go to the XO Project as well as Transitsearch.org. He’s also the author of Peranso, a software package designed for light curve analysis, so it’s no surprise that he was the first amateur to detect the transits of TrES-1b, TrES-2b and co-discoverer of XO-1b.

But it fires the imagination to think that a small observatory using two Celestron Schmidt-Cassegrain telescopes for CCD photometry and armed with laptop computers and a wireless network can be contributing serious scientific data to one of the most advanced investigations of our time. The opportunities for non-professionals to contribute meaningfully to the exoplanet hunt should engage a new generation of researchers, with or without academic affiliation. What counts are the data, and the data are obtainable, as the work of Tonny Vanmunster continues to demonstrate.

Next post: A Galactic Collision, and the Sun’s Future